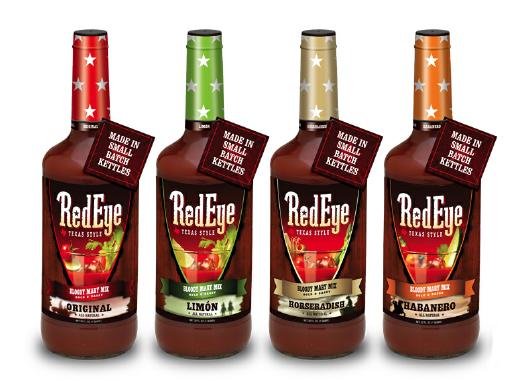 There’s no shame in using a mix to start your Bloody Mary. The last thing any hangover-inflicted drinker wants to deal with on a Sunday morning is tracking down the various and sometimes esoteric ingredients that go into the typical Bloody recipe. Pick your favorite mix, drop a bottle in the fridge, and don’t worry about it.

RedEye produces six various mixes, all natural with an awful lot of tomato, pepper, and other spices. It’s a good looking mix, with visible spice bits in a thick base. We tried four of the six available varieties. Comments follow.

RedEye Outlaw Bloody Mary Mix – Perhaps a touch thinner in consistency. Spicier, with red-pepper kick. Maybe 30 percent hotter than the Original if you’re looking for more more spice in your Bloody. The thinner consistency is actually easier to deal with. A- [BUY IT NOW FROM AMAZON]

RedEye Horseradish Bloody Mary Mix – You can definitely smell the horseradish, from a distance even. But overall it’s less spicy than the Outlaw version. About the same overall heat as the Original. Return to the thicker consistency. Similar flavor and texture to the Original, with a slight twist. B+ [BUY IT NOW FROM AMAZON]

RedEye Habanero Bloody Mary Mix – Not nearly as hot as I’d expected it would be based on the promise of the hottest generally-available pepper in the mix, just a general warming as you sip it. Maybe 10 percent hotter than the Original, but the flavor is not as pleasant, with a tinge of bitterness to it. B [BUY IT NOW FROM AMAZON]