Don Q is a huge rum brand from Puerto Rico. It’s now producing three flavored versions, two of which we were fortunate enough to review. Flavorings are natural and the proof level is rock bottom, so drink all you want.

Don Q Coco Rum is (obviously) a coconut-flavored rum (aged at least one year). Quite sweet and with merely moderate coconut character, it comes across, oddly, as a little bit chalky on the palate. This isn’t bad, but it isn’t a standout. I think Malibu or, better yet, Brinley Gold Coconut, are both quite a bit better. 42 proof (same as Malibu). B- / $17 [BUY IT NOW FROM DRIZLY]

Don Q Mojito Rum is not a mojito in a bottle but rather a mojito-flavored aged rum (see the difference?). Add club soda and you’ve got a mojito? Sort-of… It’s very tart and moderately, authentically minty — but the lime component tastes funky, which might be why lime is not mentioned on the bottle, only “infused with natural mint.” Like the Coco, this isn’t unpalatable, but I think the better solution to the mojito problem is to stick with an unflavored rum, add mint, lime, and soda yourself, and call it a day. 40 proof. B- / $17 [BUY IT NOW FROM DRIZLY] 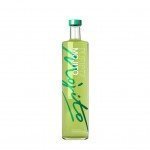