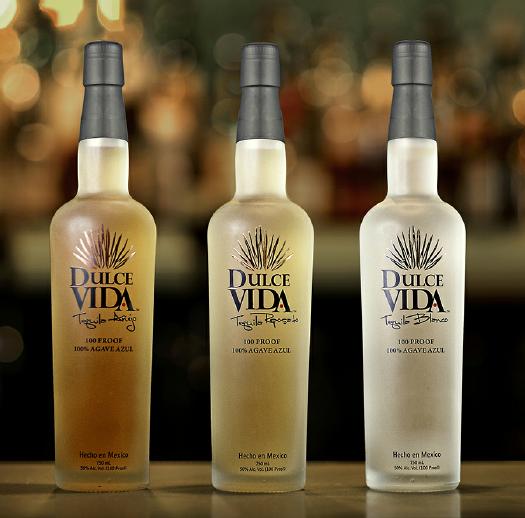 The lush life is more like it. Tequila already gets a bad rap for turning ordinary citizens into raging drunks, and Dulce Vida has to go and pump it up to 100 proof just to make sure the job gets done.

I’m sure their hearts were in the right place. The idea is that the higher proof means a stronger cocktail — and more agave flavor — once you start mixing with it. This tequila, all made from 100 percent organic blue agave and imported by an Austin, Texas company, comes in the usual three varieties. Distribution is very limited for now but will expand over 2010.

Dulce Vida Tequila Blanco (2010) is completely unaged and feels very crisp and fresh. Agave is strong in this one, naturally, and it’s braced with lemon citrus character. Lots of bite. B+ / $45 [BUY IT NOW FROM DRIZLY]

Dulce Vida Tequila Reposado (2010) is aged for a year and not just in regular oak barrels, but rather used Kentucky whiskey barrels. The result is completely unique, a clear tequila at heart but one with woodsy, spicy kick that’s a clear influence of the Bourbon in the mix. The finish is unexpected, with sweetened agave and a touch of wintergreen. A little odd; still wrapping my arms around it. B+ / $50 [BUY IT NOW FROM DRIZLY]

Dulce Vida Tequila Anejo (2010) is aged for two years in old whiskey barrels and is by far the most successful of the bunch. The wood and tequila have had time to marry and get to know each other better, giving a richer mouthfeel and a creamy, caramel character to the spirit. This is a whiskey drinker’s tequila big with sugar but still brawny and a bit rustic. Unlike many anejos, the agave still comes through, and it packs a wallop. This is a clear favorite, definitely worth seeking out. A / $55 [BUY IT NOW FROM DRIZLY]