Two Hands has a reputation as one of Australia’s most well-regarded wineries, and its 2008 shiraz releases are now hitting the market.

We tried the Gnarly Dudes bottling, made with grapes from Australia’s Barossa Valley, and found a true oddity in store for us. The big surprise up front is not the nutty and chocolaty character that many Aussie shirazes bear, but rather the intense herbaceousness in the wine. We’re talking serious herbs: Lavender and spearmint — it’s actual herbal to the point where it starts to interfere with the fruit, becoming almost menthol in character.

This isn’t necessarily a bad thing, but it does make for a tricky pairing situation. It’s more of a food wine than you’d think, as the herbality mutes itself when it has to compete with something to nosh. Try it with heavily-spiced meats or veggies. 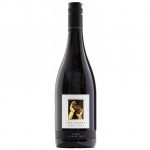