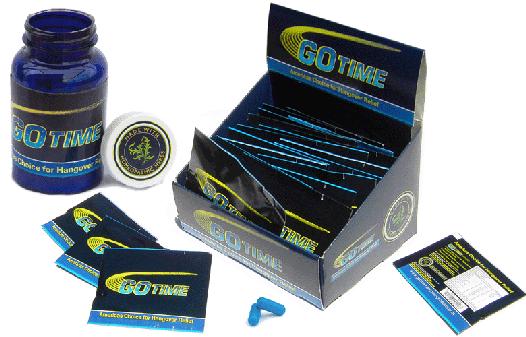 Go Time is a rarity in hangover relief products: You take it the morning after, rather than while you’re drinking or before you go to bed — when no one ever remembers to take these things. No, Go Time is intended for use when you’re suffering at rock bottom.

It also benefits from being not a drink you have to choke down but a pill, a kind of scary-looking blue capsule that, when opened, is filled with what looks like sawdust. Just swallow one down with some water (take two for “extreme” hangovers, we’re told) and that’s all it takes.

Had a few drinks last night and this morning was decidedly sluggish. Popped a Go Time and, you know, I did feel better, and have been alert and fine all day (though nine hours later I’m feeling a bit of a crash coming on). What to credit in Go Time for this? It’s full of upteen ingredients, only a few of which I know what they are: vitamins C, B1, riboflavin, B6, B12, dextrose, glutamic acid, succinic acid, cinchona bark, guava leaf extract, fumaric acid, magnesium trisilicate, L-cystein, caffeine (less than a cup of coffee, they say), and alpha lipoic acid. That’s a lot of acid, but hey, I’m feeling pretty good.