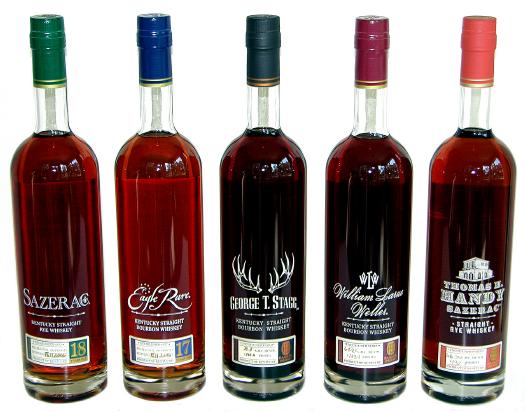 Once again Buffalo Trace brings us five limited-edition whiskeys, and for 2009 they carry the same names as last year. However, the formulations and barrels from which these whiskeys have been drawn are different, making them unique expressions that you’ll only get in 2009… and while supplies last.

Sazerac Rye 18 Years Old 2009 – Notes are similar to last year. Good rye spice, with a nice sugar rush on the finish, followed by a slightly bittersweet finale. Feels hot despite again being a 90 proof whiskey, but water helps immeasurably. I like it just fine. B+ [BUY IT NOW FROM DRIZLY] [BUY IT NOW FROM FROOTBAT]

Eagle Rare Bourbon 17 Years Old 2009 – Eagle Rare’s new 17-year bourbon is another knockout, a perfectly sweetened and surprisingly woody whiskey compared to the prior year’s rendition. I prefer the 2008 to this 2009 version, where the wood gets in the way of the nutty characters of the whiskey, leaving it tasting a bit leathery. Still quite good, though. 90 proof. A- [BUY IT NOW FROM DRIZLY]

George T. Stagg Bourbon 2009 – Now a cult favorite amont bourbon nuts, George T. Stagg’s 2009 bourbon, at 141.4 proof, is unadulterated firewater. Add some water… or a lot of water… and its charms are obvious. Caramel and thick wood sap blend together into a melange of old-school, frontier bourbon character. I like this year’s version a little better than last year. It is more in balance, dominated by rich molasses and a huge finish. A [BUY IT NOW FROM CASKERS] [BUY IT NOW FROM DRIZLY]

William Larue Weller Bourbon 2009 – 134.8 proof, far more boozy than last year’s whiskey, with, again, 11 years of age on it. Strong fruit character, with apple the big component, plus a little cinnamon on the back of the palate. A little strange, to be honest, there’s so much fruit here that I wonder if the kids’ apple juice somehow got in the mix. B  [BUY IT NOW FROM CASKERS] [BUY IT NOW FROM DRIZLY] [BUY IT NOW FROM FROOTBAT]

Thomas H. Handy Sazerac 2009 – 129 proof straight rye, with 7 years of age. Intensely herbal, it almost tastes like this whiskey’s been studded with cloves somehow, with a flood of fruit on the palate. Out of balance, this one doesn’t do it for me. B- [BUY IT NOW FROM DRIZLY] [BUY IT NOW FROM FROOTBAT]

$65 each [BUY THE COLLECTION FROM FROOTBAT]