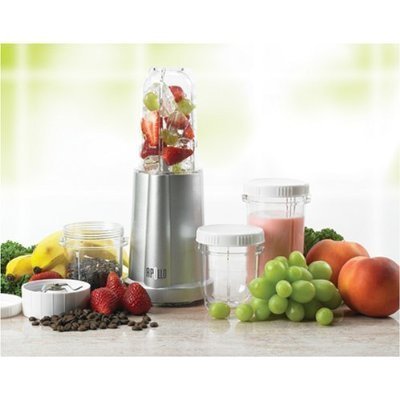 Smoothies for one? Who wants to break out the giant blender, then clean up the mess afterwards, just for a single-serve drink?

The AP-200 is so simple it doesn’t even have an on-off switch. The unique design works such that it doesn’t need on. To use it, you load up a cup (four are included, two 1-cup sizes and two 2-cup sizes; two blades — one dry, one wet — are also included) with whatever you’d like, then screw a blade attachment on top, which works as a sealed lid. Turn it over and place it on the blender base and as you press down, it activates, causing the blades to spin. When you’re done, just take it off, unscrew the lid, and drink it right out of the cup — unlike standard blenders there’s no blade at the bottom to get in your way.

The unique design of the Apollo takes some getting used to, but as a blender it works fairly well, chopping down fruit and ice with reasonable success. I especially liked how easy it was to clean up — just two pieces to go in the dishwasher when you’re done, and you don’t even need a separate cup to hold your bounty.

Sure, if your regular blender works well you probably don’t need the Apollo, but for singles, small kitchens, or for stowing under your bar for the one-off frozen drink, it’s a hit.