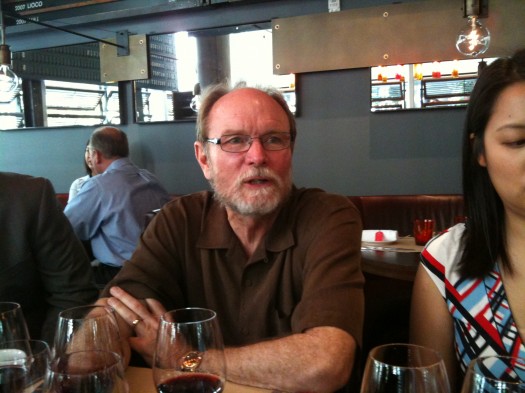 Had the chance to sit down with Ravenswood Winery’s founding winemaker Joel Peterson this week and sample his 2007 old vines lineup. The son of a woman who worked on the atomic bomb and a trained immunologist, Joel is full of stories, but most involve his love of wine, for which he developed a taste practically as a child.

Ravenswood — now a major force for zinfandel in the wine business — sells some simple table wines, but it also markets a wide range of single vineyard designates. Only a few are actually 100% zinfandel; most are blends of a variety of grapes, with zin the predominant one. In fact, my favorite wine of the lot was the 2007 Teldeschi, which includes 22% petite sirah and 2% carignane in the blend. Some of the wines — which are grown throughout Sonoma and Napa Counties — have so many grape varietals that Peterson can’t even be sure what’s in the bottle.

It is, however, mostly zin.

2007 Ravenswood Zinfandel Barricia / A- / very tannic, but opens up with perfume notes

2007 Ravenswood Zinfandel Big River / B+ /similar to Belloni, with an herbal finish

2007 Ravenswood Zinfandel Old Hill / B /woodsy, a bit out of balance

2006 Ravenswood Zinfandel Pickberry / B+ /a touch bitter on the finish, quite tannic

2007 Ravenswood Icon (field blend, not a zinfandel release) / A- /has an edge, nice balance though

1997 Ravenswood Zinfandel Old Hill / A / fascinating old zin, some DNA of the 2007, but oxidized and well aged