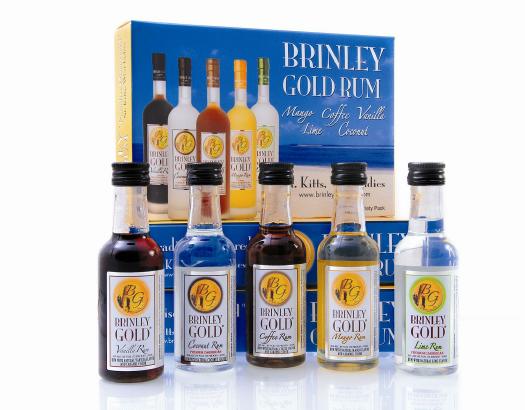 Operating out of St. Kitts in the Virgin Islands [er, apparently not], Brinley Gold offers a lineup of five rums, all flavored with natural ingredients and all bottled at 72 proof. The focus at Brinley is clearly more on the flavor than on the rum — all of these spirits are designed for mixing (sometimes you just need ice and a squeeze of lime), and for creating (mostly) fruity cocktails.

We sampled the five rums in the lineup (available in a sampler pack of five mini bottles, pictured below), with generally spectacular results.

Brinley Gold Vanilla Rum is a deep brown rum with a strong vanilla character. Maybe too strong, to be honest. Blended with natural Madagascar vanilla beans, it has more in common with a vanilla-flavored liqueur than any rum you’ve ever had. Still, for what it is, it’s extremely blendable and versatile, and it has an impressive smoothness on its own when served on the rocks, maybe with a splash of water. A-

Brinley Gold Coconut Rum is clear in color, and has a nose full of fresh, sweet coconut (as one would hope). Again, it’s naturally flavored but also quite sweet — enough to counter the alcohol here (Malibu is considerably lower in proof level) and smooth out the rum. Almost candy-like in the finish, this is another winner if you need a coconut spirit that packs more alcoholic punch than its weaker contemporaries. A-

Brinley Gold Lime Rum is a new one for me. Lime and rum is a natural combo, of course, and Brinley’s infusion is flavored with real Tahitian limes. The nose is more of tart Key limes than the standard variety, and the body is quite powerful too. Again it’s not really “rum” but the lime counterpart that makes the impact — and, as with drinking lime juice straight, that may be a bit much for some people. Maybe not quite the hit that the previous two rums are, it’s still a totally solid entry into the lineup. B+

Brinley Gold Mango Rum offers a powerful nose of mango character that seems like it’s fresh fruit that’s just been split open. That intoxicating aroma is a bit of a letdown on the body — the mango rum is hindered by a touch of bitterness in the finish, which is a surprise since the mango character itself is awfully impressive both on the nose and the palate. Light gold in color. B

Brinley Gold Coffee Rum is dark, intriguing, and really smoky and sugary — I was immediately reminded of S’Mores when I put my nose into it. Chocolate and burnt sugar are the biggies here, basically. This might be the most rum-like of the bunch, and I don’t mean that in a bad way. It’s got both the sugary rumminess and richness of coffee — a Brazilian roast, so they say —  with good balance between the two. A big winner, on the whole. A-