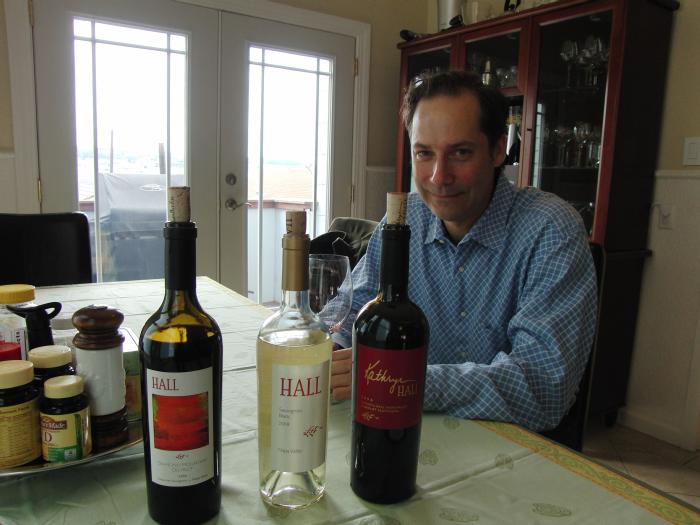 Hall isn’t a new winery, but you wouldn’t know it considering its recent pushes, making it more visible than ever. This week I sat down with Hall’s winemaker, Steve Leveque, to discuss what’s new at the winery, and to taste a few bottles of the good stuff.

The big news of late is Halls’ Gold LEED (Leadership in Energy and Environmental Design) certification, making it the first winery in California to receive the coveted badge for green building design. With radiant floors, solar power, serious recycling efforts, and even 100% biodiesel-operated vehicles on the property, Hall is massively committed to environmental issues.

Even better, Hall and Leveque are committed to great wine. We tasted through three bottles (the winery produces nearly 20 bottlings), and all three were exceptional.

Perhaps my favorite was the first, Hall’s widely available 2008 Napa Valley Sauvignon Blanc (A, $20), a very crisp and lively sauvignon blanc with peachy, almost sweet tropical notes. A lot of sauvignon blanc can get grassy, almost weedy, but Hall’s was evenhanded and light, a testament to careful winemaking.

The 2006 Hall “Kathryn Hall” Cabernet Sauvignon (A-, $75) is also fairly common in wine shops and restaurants, and it’s a solid, fruity cabernet. Black berries play with silky tannins here in a relatively fruit-forward style — I’d like to give this a few years in bottle, but with a little air, it’s ready to go today.

Leveque also pulled out one of the big dogs, the 2006 Hall “Diamond Mountain District” Cabernet Sauvignon (A-, $100), a burly and quite tannic wine with amazing blueberry character, some wood smoke, and chocolate notes. A bit of a chalky texture makes me think it’s not quite ready for drinking today, but give it a few years — or even a decade — and this one will be a knockout.