Today is Bastille Day, and in honor of the French Revolution, the folks at Pernod-Ricard sent us a bottle of Ricard Pastis (and a pétanque set) to help us celebrate.

Pastis is an anise-flavored liqueur — not the same as absinthe (but it’s the closest category we have here) since it has no wormwood, but it tastes and behaves quite similarly. Flavored strongly of licorice, pastis is high in alcohol (Ricard is 90 proof), and is served with lots of cold water, whereupon in creates a cloudy louche effect. Unlike with absinthe, sugar is not added because the pastis has sugar already in the bottle.

The golden-hued Ricard (which is based on beet spirits) is quite alcoholic without water, but its sweetness and anise still come straight through. It louches into an eggnog color with water, and once diluted to something more approachable (the company suggests 5 parts water to 1 part Ricard), it’s really quite tasty and refreshing. It’s on the sweet side for pastis, but not overly so. The anise is well done, the overall effect being more licorice-candy like, with hints of lemongrass and cocoa powder.

Just the thing for celebrating all that French bloodletting. 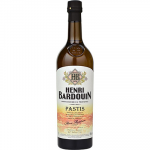