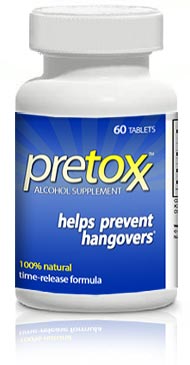 What do I like the most about Pretoxx? It comes in pill form, so no need to choke back some nasty liquid in the guise of hangover prevention.

Pretoxx is pretty simple stuff. One pill has 600mg of Vitamin C, 100mg of Vitamin B-1, and 200mg of NAC. That’s it. Basically, it’s vitamins, which you’re supposed to take to the tune of one pill per every two drinks, before you head out to the bar.

I tried it as directed, generally felt fine the next day after a long night of drinking… though quite tired. Hard to know without clinical tests one way or the other… but I can say it doesn’t hurt, and it doesn’t taste like crap, so I can’t really complain.