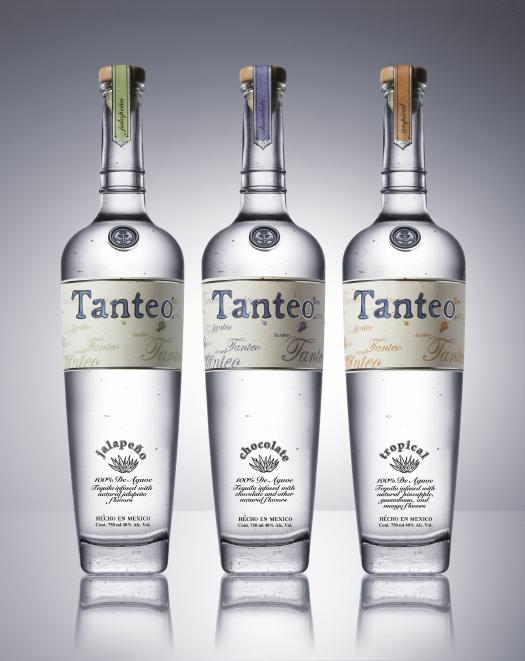 Thanks to new Mexican legislation, flavored tequilas continue to arrive, and Tanteo has two of the most intriguing concoctions we’ve seen yet (plus one already-familiar infusion). All 100% agave, these three tequilas add natural flavors to an 80 proof base, with curious results. All appear to use unaged blanco tequila as the starting point: Though the final tequila in this tasting has a yellowish tint to it (not going to spoil the secret just yet), I presume that’s from the additional ingredients, not barrel aging.

Tanteo Tropical Tequila purports to be flavored with mango, pineapple, and guanabana, and “gently kissed with the essence of jalapeno.” In reality, this one’s pineapple all the way — the nose is filled with the spiny fruit’s signature flavor, and it’s strong on the body, too. Mango plays a distant second fiddle, but it’s there, alongside traditional, herbal agave notes. It’s like a pineapple vodka, but with more nuance. This is interesting when consumed solo (drink it cold or on the rocks), but it’s clearly destined for greater things as part of a unique margarita or, as the name suggests, as a replacement for rum in tropical drinks. A-

Tanteo Jalapeno Tequila (2009) doesn’t mince words: Its only infused additive is jalapeno peppers. A real bruiser, I was immediately reminded of Agave Loco‘s powerful concoction, though Tanteo’s version has considerably less peppery heat to it. As with Agave Loco, it’s not typical jalapeno that presents itself but more of a vinegary sport-pepper character. The burn is more akin to a strong black pepper or cayenne, particularly on the nose. Not bad at all, but as with all pepper-infused tequilas I’ve reviewed, it’s not for everyone. B+

Tanteo Chocolate Tequila – We save the most interesting for last. Because, seriously, who doesn’t like chocolate? A staple in Mexican cooking, it’s a natural addition to tequila, but also a really surprising one. In keeping with the theme, Tanteo adds not just chocolate extract to the tequila but also jalapeno again, too. The results are intriguing: Chocolate, not too dark or bittersweet, is the prevalent character, but the jalapeno creeps up on you in the finish (unlike in the Tropical, where it’s not really noticeable at all). The result is sweet followed by heat, and a long agave-like finish. Again I like this one served cold, and again it’s got tons of promise in cocktails, primarily in the dessert drink milieu. A-  [BUY IT NOW FROM CASKERS]