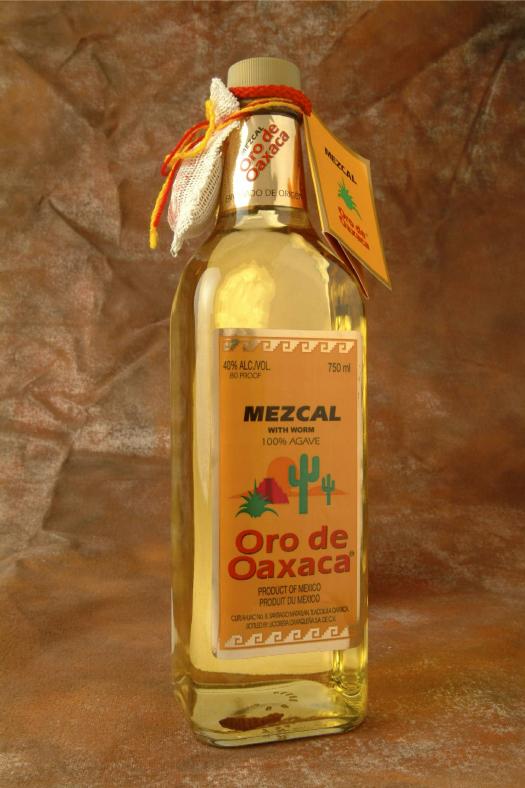 Nothing about Oro de Oaxaca Mezcal screams “premium.” It’s got a cheap bottle (with plastic cap), primary-color logo, and mystery bag of “chile” attached to the neck (more on that in a moment)… and of course it’s also got a worm sunken to the bottom of the bottle.

Ignore all that and tuck into a glass.

Intensely smoky on the nose and the palate, Oro de Oaxaca is one of the biggest mezcals around. If you’re into the smoke thing, you’re going to love this stuff — it’ll knock you down like you’re firing up a pipe.

Beneath the smoke, there’s a bit of fire — some alcoholic heat, a touch of sweetness, and green pepper notes. Pleasant overall, really, with that smoke laced throughout.

Oro de Oaxaca is light gold in color but it doesn’t indicate (nor can I discern) how long it’s been aged, if at all (that is, whether caramel color plays a large role here). I wouldn’t guess it spends long in barrels — maybe a few months. What wood is here is washed out by the smokiness, anyway.

Oh, and about that little bag of chile: It’s salt, ground chile pepper, and ground-up roasted maguey worms. Hey, hey — come back. It’s not that gross. The flavor is actually pretty good, salty/spicy just as you’d expect, and not too hot nor too wormy. There are no instructions included for its consumption, but I presume it’s a substitute for the salt in the traditional salt-booze-lime shot combo. If you’re the kind of guy that pounds his tequila/mezcal, well, you could do worse than having a little ground-up worm in your salt. That’s protein, folks.