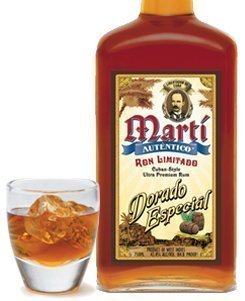 Marti is best known for a flavored, green-tinted “Mojito” rum that’s available reasonably widely across the country. (The company also has a coconut-flavored rum too, which I’ve never seen for sale.) This is Marti’s first non-flavored product, a traditional aged rum (sans official age statement), which the company labels as “Cuban-style, ultra premium rum.”

It certainly doesn’t taste like any Cuban rum I’ve ever had, but I can see what they were going for at least. Havana Club has a woody, charred, cachaca-like character too it, but Marti is overwhelming with rubber notes and a taste I’ve only been able to describe — after several weeks of sampling it — as akin to pine trees. There’s a strong amount of wood smoke here, but combined with that huge amount of rubber character, it comes across more like a tire fire than anything else.

Sourced from the West Indies (not further specified).