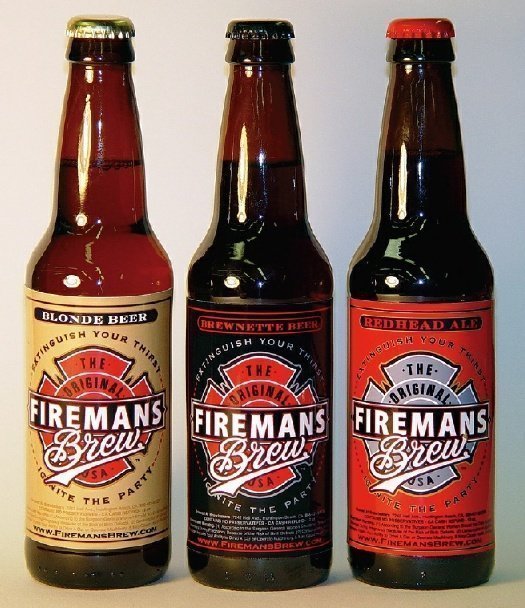 What is it about firemen and beer? Hmmm, makes sense, I guess: When I get merely warm I reach for a brew. One can only imagine what actually being in a fire might do to one’s thirst for a beer.

Firemans Brew comes out of Los Angeles, a microbrew crafted by two active-duty firemen who figured they’d brew their own while knocking out a brushfire in Glendale.

We got our hands on the entire line, which is currently available mainly in southern California.

Firemans Brew Blonde Beer – A very crisp pilsner, reminiscent of a Mexican beer but with more of a creamy body to it. A subtle vanilla character makes this more interesting than you’d expect, but it’s very refreshing whether you go analyzing it or not. 5% abv. A

Firemans Brew Brewnette Beer – Catching a theme here? A big, hefty doppelbock, with rich dark cocoa notes and a load of alcohol. Surprisingly easy-drinking, but I wanted a little more than Dutch process cocoa powder out of it. 10.8% abv (yikes). B

Firemans Brew Redhead Ale – Surprisingly light for an amber ale, it’s got a fun cocoa body with a little bit of caramel on the finish. Mildly bitter, it’s got enough complexity to be interesting and has enough that’s different about it to merit a second look. 5.5% abv. B+