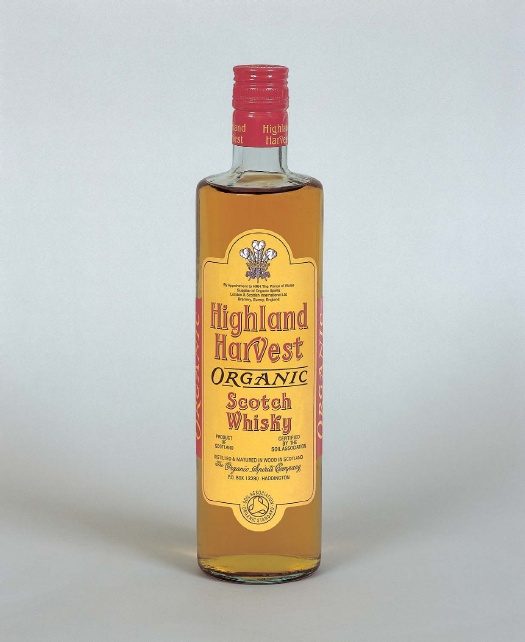 Organic everything — that’s the sell of Organic Spirits (aka Maison Jomere), which imports five different products, bottles them disconcertingly in the exact same cylindrical decanter, and puts on each a label emblazoned with the Royal Warrant of HRH Prince Charles. The Warrant is offered for placement on products which have been used for five consecutive years or more by the Royal Household, and it’s something Organic Spirits is quite proud of.

Highland Harvest Organic Scotch Whisky – To my knowledge this is the only organic Scotch in the world. (Update: Actually it’s not, see comments below for some others; it may however be the only organic blended Scotch out there.) It’s a blended Scotch, composed of three organic malts and one organic grain. The resultant spirit is a bit of a mess, all over the place with rough and raw whisky character. There’s a touch of charming honey and heather in there, so it’s not a complete loss. Could work as a mixer, but this one’s hard to enjoy on its own. 80 proof. C+ / $32

Papagayo Organic Spiced Rum – Take the Paraguayan Papagayo white rum (reviewed below) and spice it up with organic mead(!), molasses, ground ginger, ground vanilla, and ground chili. You can really taste the ginger, and the overall effect is pretty interesting for a spiced rum. Reasonably smooth, but with a funky finish that tastes a bit rubbery. 80 proof. B- / $22

Papagayo Organic White Rum – Well of course there’s a white rum version, right? The base spirit, straight outta Paraguay, crystal clear. Immediately I assumed I had gin in the bottle, just mislabeled, because of a strong juniper character in the bottle. But on cracking open the gin I realized, no, this was indeed rum, just the strangest rum ever to exist. Made from sugar cane from a single plantation in the ‘guay, once you get past that juniper oddness, this is actually not an unpleasant rum, particularly on the rocks, after you get some meltwater in the glass. Not much to it, really, but serviceable in some cocktails. Mixes poorly with Coke, though. 80 proof. B / $26

UK5 Organic Vodka – Distilled from organic rye grown on a single farm in Germany that’s been organic for 30 years. Deceptively mild on the attack, it soon gives way to a shockingly charcoal-infused finish. You can get a hint of it in the nose — woody and smoky, hard to describe but something in the neighborhood of beef jerky. 80 proof. B- / $22

Juniper Green Organic London Dry Gin – A traditionally styled London gin, taking the UK5 vodka and infusing it with organic juniper, coriander, savory, and angelica root. You can still catch that weird smoked meat smell from the UK5 here, but at least it’s tempered a bit with the botanicals. Juniper is the predominant note, but this is a gin crying out for some lemon and orange peel to give it more life. Very dry in finish, this might work in a gin martini with six or seven olives. Somehow it raises the proof a bit above UK5’s to 86 proof. B / $25