Admiral Imports, which is bringing the incredibly controversial (based on the comments on this review, at least) Koruna Absinthe to the U.S. market, isn’t just quitting with one. It’s also bringing these two absinthes — Djabel and Green Fairy, both also from the Czech Republic — to the States. 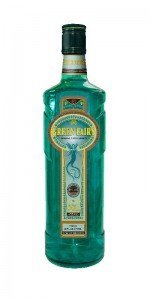 I’m lumping these two reviews together because Djabel (Czech for “devil” — also note some sources spell this product as “Djable”) and Green Fairy are pretty obviously close siblings. They use the same bottle. The labels are strikingly similar in design. The color is nearly the same — Djabel is a tiny bit darker — and both rely heavily on artificial coloration. The only obvious difference to the outside observer is the alcohol content: Green Fairy is 120 proof, while Djabel is a racier 140 proof. (Djabel is, somewhat expectedly, also $5 more expensive per bottle.)

And how do they taste? Without water, they both come across like unadulterated firewater — though Djabel is far stronger than Green Fairy thanks to that 10 percent bonus alcohol kick.

Add sugar and water and, like Koruna, neither louches at all, leaving you with a Scope-looking concoction that you can see straight through. The Djabel is again a little darker in hue, but otherwise they’re impossible to distinguish from one another.

The flavor? Very light and mild, minimally sweet (though saccharine in character), and barely flavored with licorice. Djabel has a slightly more herbal character — think cloves and allspice — but it lends an astringency to the drink where Green Fairy comes across as sweeter. Again, in the case of both absinthes (and I’ll let the absinthe geeks bicker in the comments over whether either spirit is truly absinthe at all), they’re very mild and mostly harmless experiences. And that’s really the problem: They’re drinkable, but just not very interesting. Whether you prefer a deeply anise-flavored absinthe or a more approachable, sweeter version, either way you’re going to be disappointed with these two spirits. Provocative labels aside, you can think of them both as the lite beers of the absinthe world. 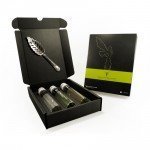 Looking for the Green Fairy with an Absinthes.com Sampler Pack