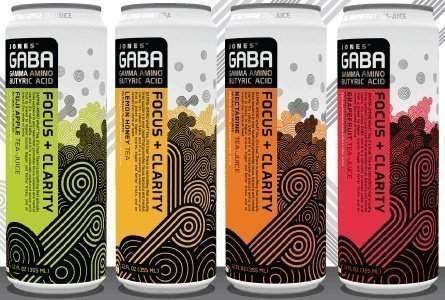 The ever-innovating soda engineers at Jones have just put out a new line of four new beverages: Combinations of brewed tea and juice, not carbonated, and sweetened with cane sugar and natural flavors. The sell: All of the varieties include GABA, or Gamma Amino Butyric Acid, a “smart drug” neurotransmitter said to “improve mental focus, balance, and clarity, while reducing stress.”

Four varieties are available, all in 12-oz. “skinny” cans. Some thoughts on each of the quartet (pictured below in the order reviewed here). Don’t forget to shake well!

Jones Soda GABA Fuji Apple – Very full of lightly tart apple flavor, like a fresh granny smith, not like the Mott’s you give the kids. Tea doesn’t come through on this one much at all, but that’s not really a criticism. I could see this mixing quite well in a cocktail. A-

Jones Soda GABA Lemon Honey – This one doesn’t actually have a juice component, just tea. It’s very refreshing — very restrained on the lemon — and the tea flavor comes through well. It’s the closest in the lineup to a bottled tea, but not overly sweet or cloying. I like it a lot. This one’s 90 calories; the others are 80 cals. A

Jones Soda GABA Nectarine – There’s a nice blend of juice and tea character here, but the orange nectarine notes aren’t as pronounced as, say, with the Fuji apple. Totally drinkable, but not my favorite of the bunch. B+

Jones Soda GABA Grapefruit – The weakest of the bunch. I like grapefruit, but grapefruit and tea aren’t much of a combination, it turns out. As with the nectarine, the grapefruit flavor needs a little more punch. Again, drinkable, though. B [BUY IT NOW FROM AMAZON]

Now with four of these in me, what about that talk of the mental focus and de-stressing effects? To be honest, I feel pretty good, and reasonably sharp, but I would expect that on noon on a Friday anyway. Definitely not sluggish, despite not having any caffeine all day. One thing’s for sure though, after four cans of juice and tea I feel, how can I put it, extremely hydrated.