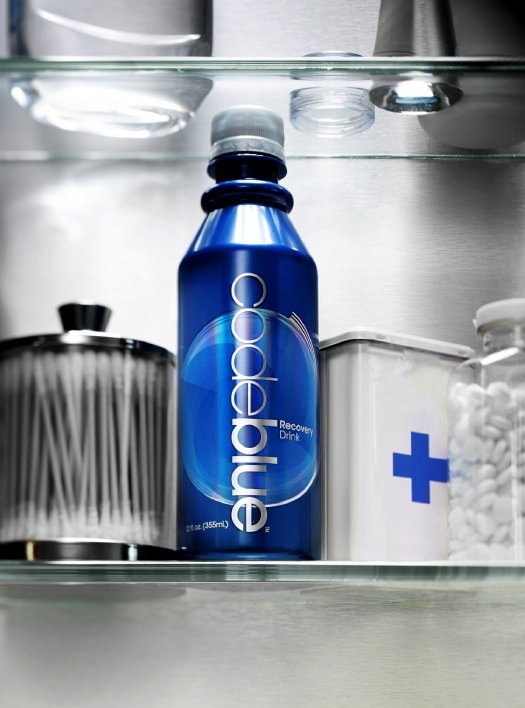 Billed as “the world’s first complete recovery drink,” Code Blue launched earlier this year with the goal of pre-de-hangover-izing the youth of America. (As with most modern hangover remedies, the idea is to drink this stuff after drinking alcohol — or during, or even before — and you’ll feel fine the next day.) And I say youth because it’s unlikely a grown man would chug a bottle of this stuff the before bedtime. Read on and you’ll see what I mean.

Let’s start with the blue. The bottle you see is opaque, but it really needn’t be: Code Blue is the color of Windex, tinged darker perhaps with a bit of cobalt blue tempera paint.

Next there’s the taste. It’s fortunately not like Windex at all, but I’m struggling to describe it properly. Lots of sweetener (agave nectar) is the key component, with a vague, fruit-and-chemical aftertaste. Imagine Gatorade watered down then cut with vegetable oil and you’ll have an idea of what Code Blue tastes like. Take the company’s advice and drink it ice cold — preferably in a glass and on ice, as the bottle warms up quickly. When Code Blue rises past fridge temperature it loses its modest charms.

The ingredient list is full of healthy-sounding curiosities: reduced glutathione (a big antioxidant we’re told), prickly pear juice (promotes liver function), and a host of vitamins, minerals, and electrolytes (a proprietary blend). A 12-oz. bottle has no caffeine and just 60 calories. Oh, and I should point out that it’s not carbonated.

The big question, of course, is how well it works. On this point I should give Code Blue props. It isn’t easy to get a whole bottle down, but I found it did indeed help hangover symptoms — at least modestly — when consumed either at the end of the night or the next day. Of course it’s hard to say whether a glass of water and an Advil would have done the job just as well, but considering that Code Blue might actually be healthy to drink, I’m willing to give it the benefit of the doubt.