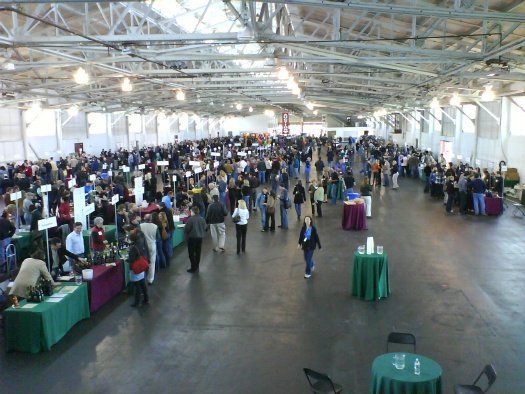 I’m on record as saying Rhone Rangers is the best annual wine event going, and once again the event failed to disappoint. Yes, it was smaller than last year — as you’d expect given the economy — with both the number of wineries and attendees obviously down a bit. (Prices, curiously, have not fallen.) Still, there was plenty of wine to go around — far more than one man could experience in the roughly three hours I spent on the floor — and most of it very good.

Most wineries were pouring from the 2006 vintage, but I saw everything from 2003 to 2008 barrel samples being poured. Overall thoughts: It’s a very good year, but quality is going to vary widely based on the producer and, more importantly, the location of the vineyard.

Visited some old friends. Olson Ogden didn’t disappoint: though its 2006 Unti Vineyard wasn’t showing as well today, its just-bottled 2007 Unti was a highlight of the show (and an amazing value). Four Vines didn’t bring its Amador County Syrah this year, but I greatly enjoyed the company’s other single-vineyard syrahs from One Tree Hill and Killer Canyon. And as usual, Peay’s La Bruma was a standout, though I like the Les Titans less this year.

Also made some new wine friends this year, with L’Aventure, Saddleback, and Skylark making strong impressions with ripe, fruit-forward syrahs and Rhone-style blends.

My detailed notes are lacking, but I tried to make up for that with volume, hitting 45 different bottlings this year. Full report follows!