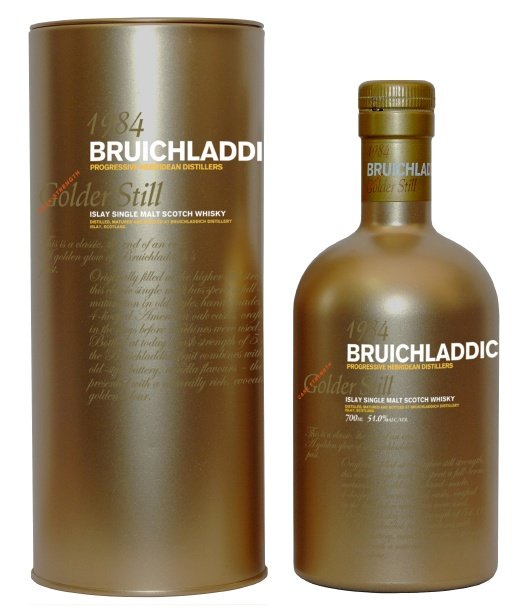 Bruichladdich — a perennial favorite at Drinkhacker HQ from Islay — recently released a number of new expressions of its classic whisky, some with surprising compositions. We got our mitts (and tongues) on four of them: 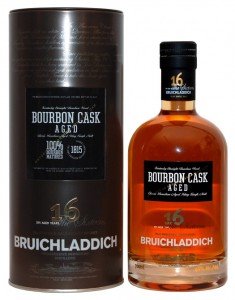 Bruichladdich Bourbon Cask Aged 16 Years Old – No big surprise here. 97 percent of Scotch whisky is matured in old bourbon casks, and this is Bruichladdich’s version, aged 16 years in old Jim Beam barrels (plus some other bourbons), and bottled at 92 proof. A quite light gold whisky, it’s got a moderately light peat atop a pleasant honey sweetness. A touch of vanilla is drawn from the bourbon cask, before finishing on a round, mouth-filling, peat-smoke note. It’s a good whisky, but a fairly simple one. B+ / $55 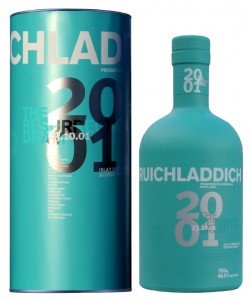 Bruichladdich 2001 Resurrection Dram – Bruichladdich closed down in 1994, before being revived by private investors in 2001. This is a “celebration bottling,” selected from a strange stock of lightly peated whisky — the first spirit to flow from the rebuilt stills at the distillery. At just seven years old, I was expecting something considerably more delicate, but this is a big whisky with far more peat than I’d thought. The smoke weighs heavily on the sweet, which tries its best to peek through, but overall not totally engaging. 92 proof. B / $43 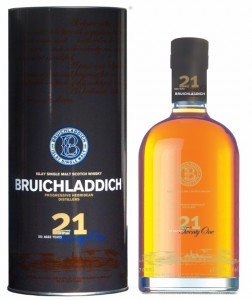 Bruichladdich 21 Years Old – The darkest of this bunch, a green-tinged medium amber, Bruichladdich’s 21 year old (replacing the company’s 20-year bottling) is a clear favorite and a remarkably tasty dram. Aged in Oloroso Sherry casks, it is immediately redolant of sherry, a citrus-infused spirit with sweet honey and nutty notes alongside it. No peat at all to speak of, this one goes down with startling ease. Really, really lovely. 92 proof. A / $230

Bruichladdich 1984 Golder Still Cask Strength (pictured above) – A 23-year-old, vintage-dated whisky, it’s the oldest — and at 102 proof, the strongest — whisky of the lot. About 4,900 bottles (each numbered) were produced. Surprisingly mellow for such an alcoholic whisky, but the heat creeps up on you. The body is very firmly in bourbon territory — it’s aged in “rare, squat bourbon hogsheads,” not casks — with brown sugar and vanilla the strongest characteristics. Less approachable than the 21 year, it makes up for easiness with a complexity that offers mild peat and dried fruit alongside the sugar. The ostentatious gold bottle is, if nothing else, a real conversation piece. A comparative bargain for the age and quality. A / $128 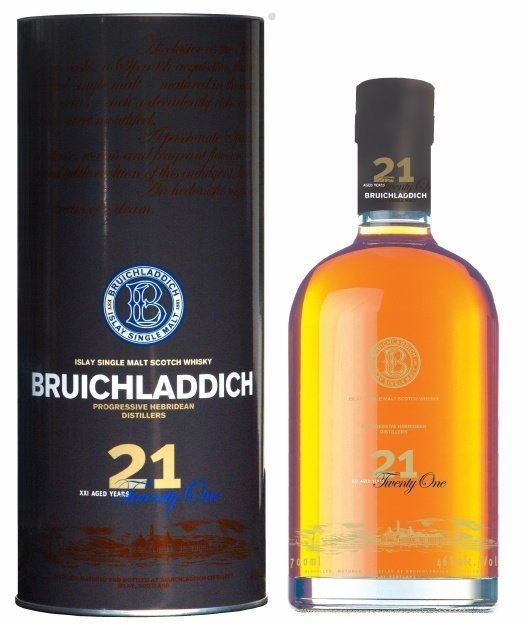