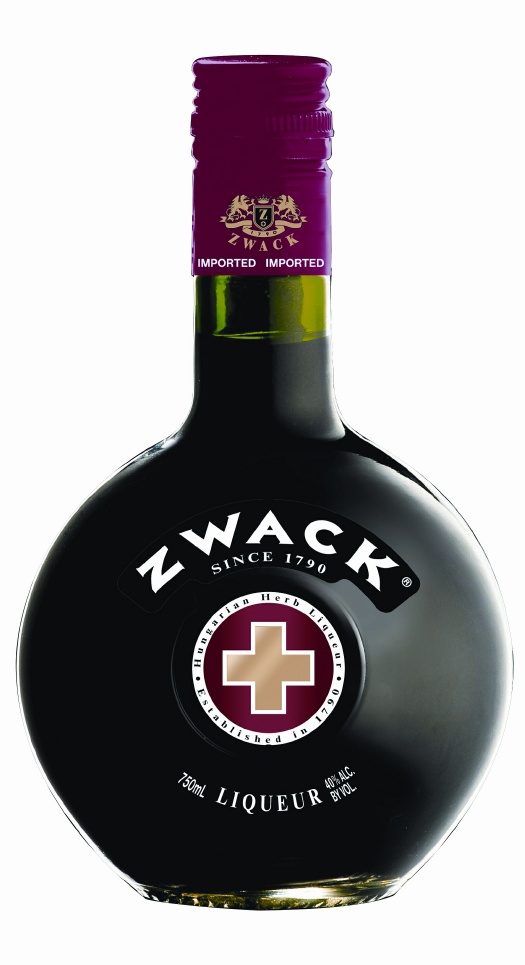 Zwack is wack! Sorry, had to do it. It won’t happen again.

Zwack is a Hungarian company that produces amaro-like digestif bitters, dark brown liqueurs flavored with dozens of herbs and aged in oak. For years, Zwack produced only a spirit called Unicum, which is said to be so insanely popular in Hungary that they often give you a shot free after dinner.

Zwack is now adding another spirit to its stable. Overseas it recently launched a spirit called Unicum Next, and another liqueur (different in recipe but similar in flavor) sold merely as Zwack is being added for the U.S. market. It looks like original Unicum will continue to be sold too, and if you don’t read the labels carefully — both feature a huge gold-on-red cross on a rounded bottle — you may end up with the wrong one. The difference? Unicum is extremely bitter, while Zwack is considerably sweeter, featuring a very strong cherry character.

As a fan of Fernet Branca, I’m already inclined to like the intensely flavored Zwack. While Unicum is great for sipping after a big meal — it’s quinine-like bitterness soothing the belly — Zwack is probably going to be a far bigger crowd pleaser. The sweetness is pronounced but not overpowering. Unlike some amaros, you can still drink it straight without wanting to gag from all the sugar.

Zwack is intended to be consumed chilled, and it’s a little better that way. (Unicum, on the other hand, is fine at room temperature.) Far more palatable than, say, Jagermeister, the frat crowd will appreciate it just the same: At 80 proof it still packs a massive punch. Drink with caution.