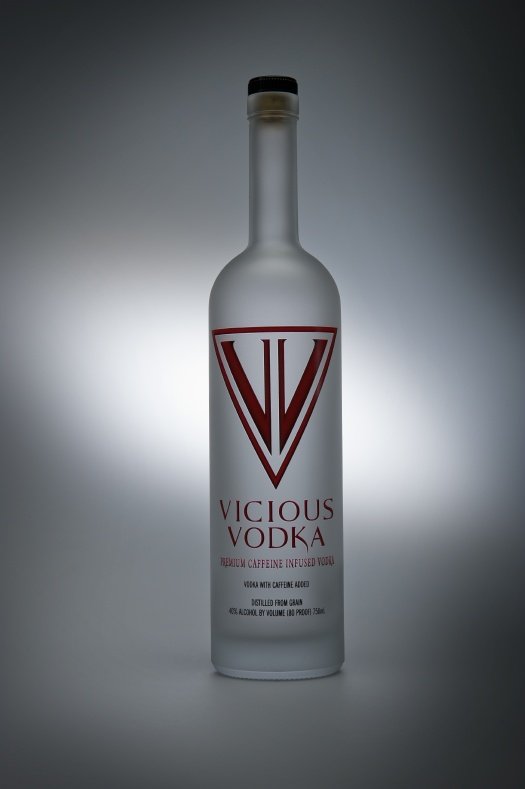 I had no idea how combative the idea of caffeinated spirits would be: Vicious Vodka claims to have originated the idea six years ago, fighting for months for government approval to add caffeine to booze. The company has a patent on its production process and remains a small, deeply devoted player in this market, with just four people in the business.

Distilled three times from a mix of five grains, Vicious is infused with “pure caffeine” and none of that taurine or ginseng nonsense. The company says that, aside from caffeine, there are no other additives in the bottle, the goal being a taste on par with super-premium, non-caffeinated vodkas. Vicious doesn’t offer figures, but it does say it has the most caffeine of any caffeinated vodka on the market, the maximum allowed by the U.S. government.

I have to say that Vicious lives up to its claims. It’s a very smooth, drinkable spirit that I’d have no trouble adding to any cocktail I wanted to pump up with caffeine without resorting to Red Bull or Coke. The nose is very faint, lightly medicinal, and the palate is largely neutral, with a light sweetness in the body.

The finish is where things get a touch rocky. A bitterness creeps up out of the spirit as it lingers, manifesting in a light chalkiness that’s reminiscent of what you get if you let an aspirin dissolve on your tongue. I assume this is from the caffeine additive.

This is really only noticeable straight and vanishes with any kind of mixer. Completely credible vodka on the whole (though terribly hard to find, it seems), and while I don’t feel jittery after a night with it, there’s definitely a pick-me-up effect at work. Damn, now I gotta go to bed.