So imagine my surprise to discover that the 100-proof Morgan is better than the 70-proof Morgan. Modestly better, yes, but a distinct improvement.

Flavor-wise you’ll find the two — which I tried side by side — extremely similar. Both are creamy and full of vanilla and burnt sugar flavors — hallmarks of rum — but relatively tepid in the “spiced” department. Aside from a mild touch of cinnamon, neither version is so racy that you’d need a pegleg to drink it.

The difference is all in the finish. While standard Captain Morgan has a harsh alcoholic finish, the 100-proof version is — inexplicably — quite a bit smoother. This makes absolutely no sense on its face, but repeated tastings — and even additional conscripts brought in to verify this fact — bear out its truth.

Bottom line: If you like Captain Morgan (and given that it’s one of the best-selling spirits brands in the world, many of you do), you’ll love the 100 proof variety. If you don’t like the good captain, well, give it a shot anyway. You may be surprised. 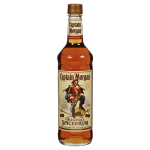