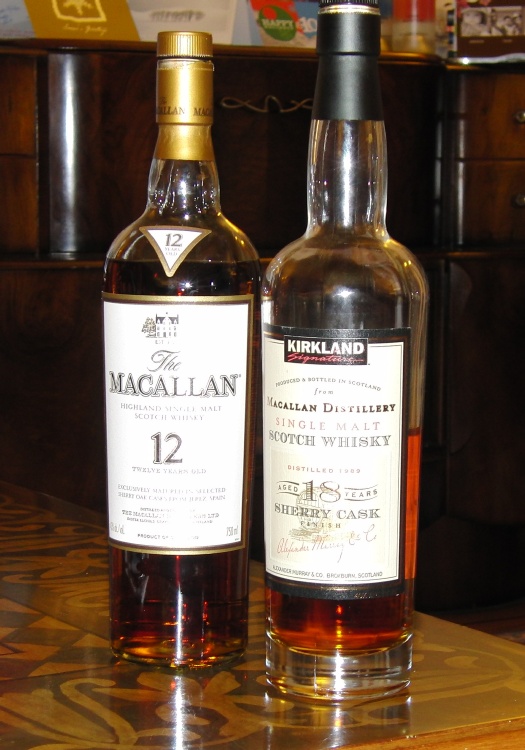 Kirkland? If that name sounds familiar it’s because it’s the house brand of big box megastore Costco. And yes, they bottle their own brand of Macallan Scotch whisky.

For newbie whisky drinkers, allow me to explain in brief.

In a nutshell, this is how it works: In Scotland they make a lot of whisky. Sometimes they make too much. This was especially true 10, 20, 30 years ago, when single malt Scotch wasn’t popular as everyone was drinking blended Scotch. So rather than sit on barrels taking up lots of space — barrels that they figured they wouldn’t even be able to sell later anyway — the barrels were sold outright to others for “independent bottling.” Often these are merchants, and though CostCo is not exactly a quaint shop in Speyside, it’s a merchant nonetheless.

The independent bottlers take the full casks, mature them in their own warehouses for whatever time they like, then bottle the whisky. Normally this means you see a label with two brands: The bottler and the source of the whisky, though sometimes the actual source is obscured or only hinted at.

And thus we arrive at Kirkland’s Macallan 18. Before we start tasting, you might ask why would anyone even consider a Kirkland Macallan 18 when Macallan makes its own 18 year Scotch? After all, who knows where the Kirkland casks are aged and bottled (somewhere in Scotland, anyway)… and the climate of the aging facility can deeply impact the resultant spirit. The answer is simple: The distillery-bottled Macallan runs about $140. The Kirkland Macallan is $80 (sometimes as cheap as $60). You do the math.

And so on to the tasting. The Kirkland is a lightly smoky/charred Scotch, 80 proof, and heavily malted. Moderate amber in color, it’s like a little world of Scotch in a glass — a bit of oak, a bit of honey, a bit of heather, and a lot of sherry. I was put off a bit by the interplay with the smoke and the sherry so I tried it next to the only other Macallan I had on hand, the standard 12 year. More malty and with far less smoke and char to it, I found the distillery bottling more generally pleasant, and enjoyed the more distinct sherry character. The balance was right on the money. The Macallan 12 is a better pick for everyday drinking, while the Kirkland 18 requires more careful consideration before it’s popped open.