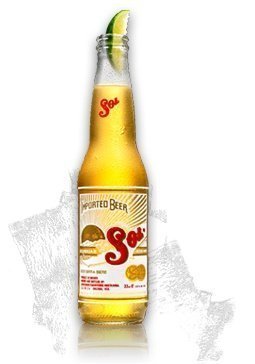 Sol, where have you been all my life?

On a lark, I ordered a bottle of Sol — a brand I’d been wholly unfamiliar with — during a quick Mexican dinner this evening. That rapidly turned into a second, which disappeared as quickly as the first.

Sol is a traditional Mexican brew that dates back to 1924. It’s slightly darker — a moderate gold rather than the usual pale yellow — than most Mexican beers, a hint to its deeper and richer taste.

Sol doesn’t offer any huge surprises, but it’s got smoky and nutty hints where other Mexican beers can come across as thin and weedy. It’s rich without being heavy, with a good mouthfeel and a comforting, light creaminess. It’s lightly bitter and doesn’t venture into the sweet arena at all. The name is quite apt: It’s sunshine bright and quite relaxing, with no skunkiness to it at all.

I enjoyed both bottles ice cold and without lime — didn’t even think to ask for a wedge. Sol’s plenty good on its own. Mexican beer fans are well advised to track it down.

UPDATE: It’s come to my attention that Sol is almost universally reviled by beer pros… did I luck out and get an especially fresh batch? Has something in the production changed at Sol HQ? Planning to track down the beer again from a different source so I can ensure this wasn’t just a fluke.