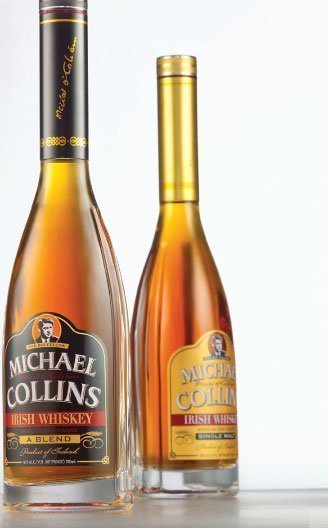 To consider the rich amber color of the whiskey you’d think you’re in for something hefty (check the photo below — the bottle itself is clear!), but on first nosing and sipping that’s clearly not the case. Collins is light as a feather, a honey and caramel whiskey that tastes considerably younger than the four to twelve years this spirit spends in bourbon casks.

It’s playful but uncomplicated, with the malt character played down and the sweet stuff taking the reins. The finish is on the rough side as the grain-based whiskey takes over from the malt, but that doesn’t let the whole down too much. Overall Michael Collins Blended is perfectly serviceable, if unchallenging. (It’s worth noting that Jim Murray complains vehemently of over-use of flavor-killing caramel color in both of the Michael Collins whiskeys; I’m not sure I agree on the taste concerns, but the dark color does mess with your expectations quite a bit.)

Note that you can find a gift box of this whiskey with a golfer’s kit and flask for the same price as the bottle solo.