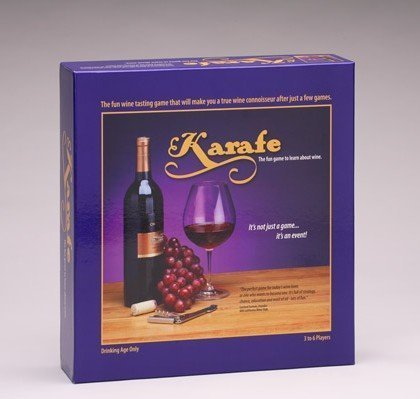 I love the concept of the board game Karafe: It’s a lot like the game of Life, where you try to accumulate wealth as you get from start to finish on a long, twisting road, only it’s got a big twist: Rather than go from cradle to grave with a real job, you go from broke to wine merchant, answering trivia about vino along the way and — hopefully — drinking wine, too.

The game is actually more complex than its simplistic board would seem: You first accumulate money, then use that money to buy land, then harvest grapes from that land, then bottle wine from those grapes, then sell the bottles for cash. Whoever ends the game with the most cash wins. There’s a fair amount of strategy here, as prices and yields fluctuate over time, and you have to choose when to pull the trigger and switch from, say, buying land to harvesting grapes.

On each square you have to answer a wine question correctly to earn the right to do what the space says — or, in one of the game’s cleverest spins — correctly identify which wine you’re drinking from three bottles you’ve opened by taste alone in lieu of answering the question. How similar the bottles that you choose are helps determine the difficulty of the game.

If you’re into wine it’s all good fun, but alas, there are too many silly questions about wine-tasting terminology and obscure Spanish grape regions and not nearly enough tasting for this gamer. The game features two difficulty levels to pick from, but the easy questions are very simple if you have even a passing interest in wine; instead they tend to encourage the wine taste tests predominantly. But the expert level is genuinely tough and during the course of our game, no wine taste tests came up at all… which kind of defeats the point of opening three big bottles of wine to play with.

One of the biggest flaws in the game is that it can require some complex math to be done on the fly… and that’s asking a lot of people who will have been drinking a lot. Quick: What’s 4,950 x 18? Yeah, we had to get a calculator, too. There are typos on the board, as well.

I will say that, despite some goofy queries, many of the questions are intriguing, and I did learn a thing or two over the course of an evening’s play. I doubt this will make, as the game claims, a player into a “true wine connoisseur after just a few games,” but it won’t hurt. My suggestion: Pop open some wine, forget the game board, and just ask the trivia questions at random until the wine is gone.

Review: The Wines of Game of Thrones, 2017 Releases