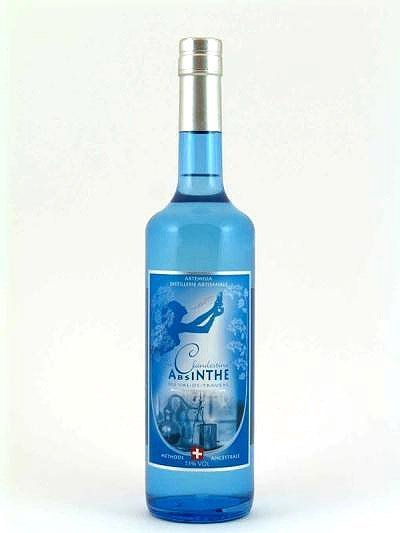 Part of the rare but growing segment of “blanche” (aka “la Bleue”) absinthe, La Clandestine is a Swiss absinthe with a recipe that dates back to 1935. The main difference: Blanches are clear, without the traditional yellow/green tint that has earned absinthe its noteriety and its famed “green fairy.” (The reasoning dates back to absinthe’s illegality: The clear color could fool the authorities into thinking you’ve got something else in the bottle… the aroma, however, is a dead giveaway.)

Coloring aside, by and large, blanche absinthes smell and taste much like the standard variety. La Clandestine is an absinthe much in line with what appears to be a trend — sweeter, less bitter products that are more accessible to a wider audience entranced with the absinthe mystique. That’s not a bad thing: Many absinthes have a harsh bitter aftertase that makes them difficult to drink without copious amounts of sugar and water. La Clandestine needs only minimal doctoring; the company itself even suggests it can be consumed without sugar, and sure enough, though it’s 106 proof (actually on the light side for absinthe), it’s even sippable straight… though that’s definitely not my recommendation.

With its clear anise notes and heady aroma of fennel and sugary sweets, this is a very drinkable and easygoing absinthe. But what I actually like the most is the interesting and unique lavender color of the louche. La Clandestine is an absinthe you can stare it for hours, getting lost in its milky swirls while you get quietly drunk off your ass.