Earlier this month we took a look at three rums from the Maui lineup, which (obviously) hail entirely from Hawaii and aren’t readily available in the U.S. 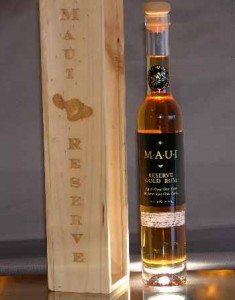 Today we got a crack at two of the company’s remaining products, a Gold Rum and a Reserve Gold (both 80 proof), rounding out the rest of the current lineup.

Maui Gold Rum – Somewhere between the light and the dark lies this amber-hued spirit, a traditional gold rum with a good amount of age on it that displays some good vanilla and honey character but still bears the telltale harshness of white rum. The interplay between that raw, fermented cane sugar and the more aged notes is interesting, though I prefer the darker, cocoa-tinted notes of the Maui Dark. B+ / $29

Maui Reserve Gold Rum (right)- The Gold gets amped up and smoothed over by spending more than a year in casks, mellowed out into a creme brulee liqueur tempered with honey and brown sugar. The nose is a bit harsh, but the smooth taste of the rum itself and a moderate finish make up for the olfactory kick. Bottles are individually signed and numbered — I had the honor of getting a very rare sample drawn from cask #1 (of which 175 half-bottles are available at a price of $80 each). A- / $60 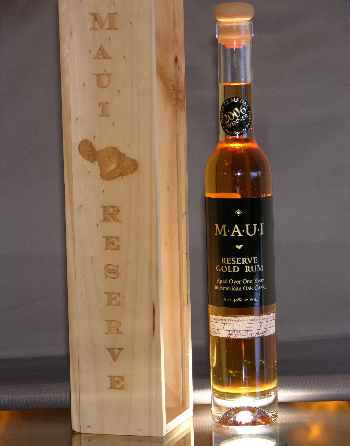