What a gorgeous, lush rum this is. From the land of Guatemala comes Ron Zacapa’s old rum, aged at 8,000 feet above sea level (where the temperature averages 62 degrees) and blended from rums in the solera style. The rums in the blend range from a youthful 6 years to a hoary 23 years old (and are stored in a variety of casks, including old bourbon, sherry, and wine barrels). The result is an instant hit.

Cola brown in color, it’s one of the smoothest rums you’ll taste, easily sippable neat (or with ice, your call). Though pressed from pure sugar cane (not molasses), it has none of that cachaca funk. Instead it’s a caramel and cinnamon bonanza, a quite sweet rum that immediately lets you know it’s rum at heart, but with so much more depth to offer. Continued drinking reveals cocoa and vanilla and some nuttiness. If any rum was ever designed for drinking after dinner, it’s Zacapa 23.

At $45, it’s pricey for rum, but the quality is just as high as some even more expensive old bottles, including Homere Clement, which is nearly twice the price. Get some! (Also: Note that the bottle and official name of the spirit have changed recently.) 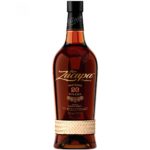