After my report on Sgt. Classick‘s Hawaiian-based rums, the good folks at Haleakala Distillers responded to remind us that Classick isn’t actually distilled on the island, and that its products are. In fact Haleakala is the only distillery on the island of Maui, and produces a selection of fine rums.

None of these rums are widely exported to the mainland for retail sales but they are widely available in Hawaii and all can be purchased via the Internet.

Maui Platinum Rum – This is an 80-proof white rum with a burst of flavor unlike any you’ve ever tried before. Molasses are strong in this one, cutting through white rum’s traditional, industrial notes. That sugary character is very long lasting, lingering in the mouth for seconds after you swallow. The nose is harsher than the spirit is on the palate, which reminds one of fresh sugar cookies and makes you hunger for dessert. B+ / $29 [BUY IT NOW FROM DRIZLY]

Maui Dark Rum – This coffee-brown, 80-proof spirit has many of the same flavor characteristics as the Platinum, but deeper and richer. More appealing with its clear chocolate flavors, this is an excellent way to add hints of cocoa to a cocktail, though it’s not really complicated enough for sipping straight. Very appealing. (There are also a Gold Rum bottling and several “Reserve” bottles but I have not tried them.) A- / $29 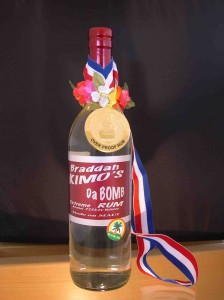 Braddah Kimo’s Da’ Bomb Extreme Rum – Billed as the strongest rum available in Hawaii, it’s the strongest rum available anywhere as far as I know. At 155 proof (that’s 77.5% alcohol, people), it’s actually illegal to take on a plane due to its extreme flammability. The rustic label (which still bears Maui’s old identity before the rest of the line was given an upscale new moniker) is immediately scary, looking a bit like something you’d see on a bottle of homemade moonshine. But poured on the rocks I was immediately taken aback. The nose shows no sign of being overproof. If I didn’t know any better, I’d have thought I was smelling standard white rum. That first sip lets you know otherwise, of course. This is a burning monster, to be sure… and yet it still exhibits white rums best features. Dare I say this is the first overproof rum one could conceivably drink on its own? You’d be crazy to do so, but the flavor profile is much like the Maui Platinum, a sweet, sugary spirit that is also safe to use as an antiseptic… or as lighter fluid. Land a bottle of this and you’ll never use crummy old 151 again. A / $35