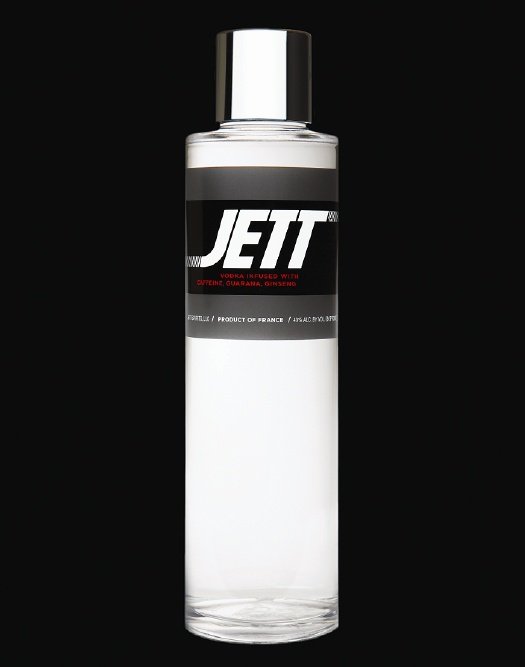 It’s another vodka, so let’s cut to the sell. Jett is infused not with fruit but with the staples of energy drinks: Caffeine, guarana, and ginseng. (What, no taurine!?)

Now on sale only in Los Angeles, Jett offers club kids a way to get their stimulants and depressants together without having to shell out an extra $7.50 for a can of Red Bull. Can’t blame ’em for wanting to streamline their fix.

The vodka is quintuple distilled in France (from unspecified grain) and bottled at 80 proof. The brainchild of Jeff Kanbar, the spirits has quite a pedigree: Jeff’s uncle Maurice Kanbar launched Skyy in 1992 and Jeff worked for the company before starting out on his own.

And now for the tasting: Putting aside the additives for a moment, the vodka is clean, but it packs quite a surprising kick. I’d have guessed it was well beyond 80 proof. Some honey notes balance the medicinal tones, and there’s a moderately bitter finish. Overall it’s a very straightforward vodka, and if you didn’t know there was anything unusual about it, you’d never expect it to contain the aforementioned additives. I find it a little rough around the edges for straight drinking. It works fine in cocktails.

As for the caffeine and such, I don’t exactly feel like I’m bouncing off the walls, but I’m plenty alert after my samples. My suspicion is that it would be difficult to pack much of those substances into a shot of vodka without dramatically altering its flavor, so I doubt you’re getting much impact out of Jett aside from that of the alcohol. Of course, considering the target audience for Jett, I’m sure every little bit helps.