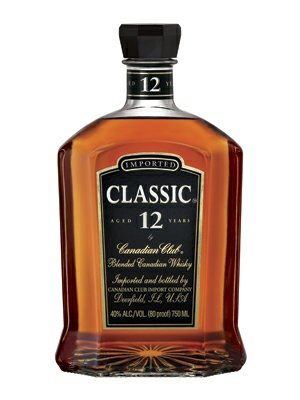 In case you haven’t been reading your glossy magazines, the venerable Canadian Club is working on a comeback, with retro ads touting the whiskey as what “your dad drank” in a broad appeal to both your machismo and your father complex. Sure enough, though, if you check Dad’s liquor cabinet, he’s probably got a half-consumed bottle of the Club in there, likely bottled around 1974.

Celebrating its 150th anniversary this year, Canadian Club sent a bottle of the Classic 12, (aka just Canadian Club Classic), a step up from the traditional Canadian Club, which is aged for just six years.

80 proof and obviously blended with care, it’s a very light and generally harmless whiskey. The flavor is muted. The finish is very short. What’s there is traditional whiskey notes of honey and some light flower character. Not much to it. Drink it with water and you may feel like you’re sipping iced tea. (Hmmm… maybe that’s why dad drank so much of it.)

That said, who’s going to argue with the likes of Al Capone, who counted Canadian Club as his favorite tipple?