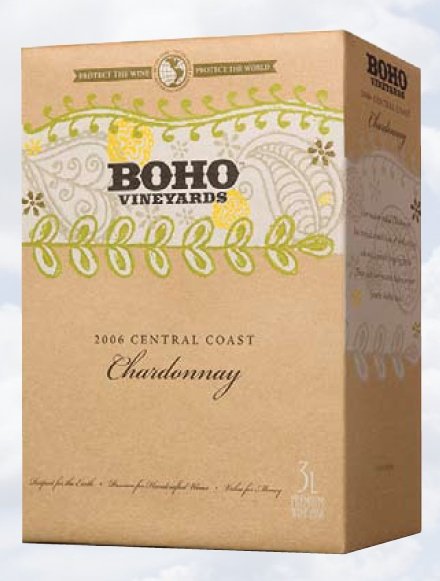 Wine in a box doesn’t have the most savory reputation, and for good reason: Most of it is awful plonk.

Boho Vineyards is a welcome change to that equation, offering a three-liter box of not-at-all-bad Chardonnay that you can stow in your refrigerator so it’s always at the ready. The sell: three liters equals four bottles of wine, and in a box it takes up far less space and uses far fewer natural resources to create. The 20 glasses of wine inside also last much longer than bottled wine since air can’t get in: Boho promises six weeks of freshness, vs. the spare day or two you’ll get with an open bottle stuck in the fridge.

I tried the company’s 2006 Central Coast Chardonnay (it’s not some anonymous blend of random grapes) and found it quite palatable, so much so that we’re still sipping from the cask a week after tapping it, and it tastes just as fresh today as it did back then. The wine itself is not going to blow your doors off. It’s a crisp, lightly oaked California Chardonnay, vibrant grape and apple acidity with a mild finish. It’s overall a very simple wine for sipping before dinner or with a lighter meal.

At $24 per box, that’s the equivalent of $6 a bottle. And while there are a few palatable $6 Chardonnays out there, Boho’s enviro-sell might very well seal the deal, especially if you need a lot of wine for a big event or, say, to make a white sangria. Give it a try.