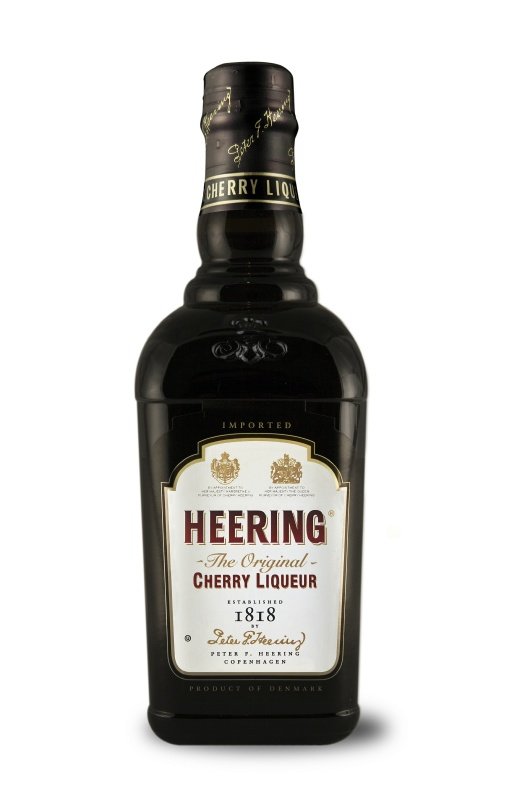 Cherry Heering has always been one of cocktaildom’s most puzzling spirits. Bartending books regularly call it either Peter Heering or Cherry Heering, sometimes in the same tome, leading novices to wonder if there is more than one kind of Heering out there. To compound matters further, the bottle itself just reads “Heering.” Beneath that you’ll find “Original Cherry Liqueur… bottled by Peter F. Heering.” Neither of the common names for the liqueur actually appear on the label! 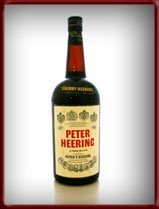 Cherry Heering (which is what the company calls it, so we’ll call it that too) has been around since 1818 and stakes its claim as “the original cherry brandy.” The Danish concoction is regularly called-for as a branded ingredient in cocktails, and it’s a great way to add both red color and cherry flavor to a drink recipe. Note that clear Maraschino liqueur is made with a process that includes distilling cherries and cherry pits (and even leaves and stems); the distillate is then watered down and sweetened. Kirschwasser, at its typical 90 proof, is simply a distillate of cherries, unsweetened; it has far more burn than Bing.

Heering is a mere 48 proof and a lovely shade of crimson. The aroma of Heering has more in common with Port wine than it does with cherry elixir, and that wine-like character extends into the flavor. It’s all due to the dark Stevens cherries used for the juice and the oak-aging of the liqueur for up to five years before it’s bottled. Silky and less sweet than you’d think, it’s not medicinal at all, and really plays to the strengths of the fruit. Heering is even palatable on its own (try it chilled), though sipping liqueurs solo is a fool’s game. Really, Cherry Heering is most impressive in cocktails, and I’m now even pondering whether to replace it in my cherished Casino recipe, color be damned. 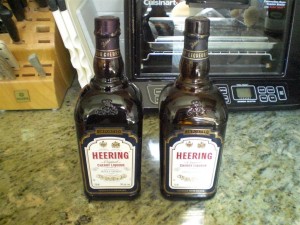 The weird thing is that Heering says it is reintroducing the brand in the U.S. this fall to take advantage of the classic cocktail craze and jump-start sales again. I’m told the packaging has been redesigned… so I put the new bottle against one that’s been in my collection for years. The new bottle is on the left. If you can spot any differences (color variations are due solely to lighting conditions), you’re a better man than I am. (UPDATE: Turns out the old bottle, shown at the top of the post, was used from introduction through 1995.) The good news, I’m promised, is that the recipe remains unchanged. Cherrs! I mean cheers!