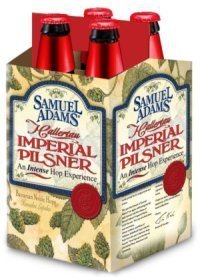 The label of Samuel Adams Hallertau Imperial Pilsner reads “An Intense Hop Experience.” Emphasis not added: “Intense” is in italics, bold, and underlined, so you know they’re serious.

Sure enough, as the bottle promises, there is an “enormous, almost reckless” amount of Noble Hallertau Mittelfrueh hops in each bottle of the Imperial Pilsner. Whatever complexity there might be in the beer is completely overwhelmed by those hops, and if you’re a fan of super-hoppy brews like IPAs might want to give this beer a shot. I’m normally a big fan of IPA but pushing past all the hops here was just too much for me. I’ve tried it three times now, with pretty much identical thoughts every time.

Also be warned of the hefty alcohol content: At 8.1% this carries quite a punch.