Did you know: It was illegal to distill vodka in Switzerland until 1999? A vestige of World War II, when it was felt inappropriate to turn grain, in short supply, into booze instead of bread. (Though, if I had my druthers, I know what I’d give up.)

Xellent was the first — and so far only — vodka to come out of Switzerland since the ban lifted. Four years in development, Xellent is the brainchild of Andreas Affentranger, a third-generation distiller whose grandfather started making traditional fruit brandies in 1918. (The company still makes fruit liqueurs.) Distilled from rye grain harvested from local farms and made using mineral water from the nearby Titlis glacier, this is one pedigreed vodka. I could feel the price Affentranger had in the product, which he enthused about over a multi-hour lunch, during which much vodka was consumed.

One whiff of Xellent and you know you’re dealing with something unique. While many vodkas aim for “neutral” and flavorless, Xellent wears its flavor on its sleeve. This is a pungent, aromatic vodka with a strong lemon tone, both in the aroma and in the flavor. On its own, Xellent can be overpowering, to be honest. Drinking it straight, without food (on an earlier night), it took my breath away (though it’s just 80 proof). It was better on the rocks, especially once the ice melted a touch and mixed in with the spirit.

Over lunch, we had Xellent straight with sashimi, and this proved an excellent (har har!) combo, even though the vodka had warmed a bit by the time we got to it. I was a big admirer of one of the cocktails my hosts had mixed: Xellent Spring (recipe below) was a complex and fruity concoction of Xellent, lime, strawberry, and champagne. Sweet at first as you get the strawberry at the bottom of the glass, then the brut flavor of champagne to cap it off. And it was one of those rare cases where you can actually taste the character of the vodka, with Xellent’s pungency intermingling with the other ingredients in ways that are difficult to describe.

Another cocktail, Xellent Hell, was interesting, but a bit too peachy for my taste. The chili pepper garnish was a surprising touch, and it really did impart heat to the drink.

As vodkas go, you won’t find a more interesting version on the market. Though even Affentranger admits that people have a polarized reaction to the vodka one way or the other due to its strong and unexpected flavor, I’m a fan of anything that gets people talking.

Fill a long drink glass with crushed ice, add first four ingredients. Stir with a long spoon, then top with champagne. Garnish with a fresh strawberry. Drink with a straw.

Pour all ingredients in a shaker with ice. Shake and strain into a cocktail glass. Garnish with two red chilies. 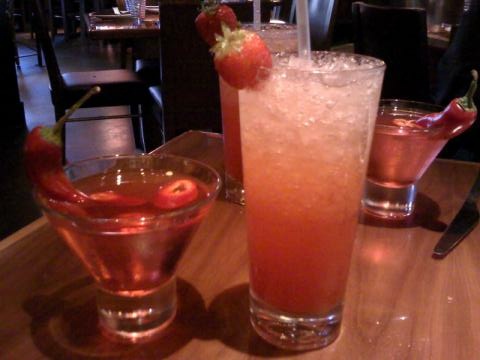