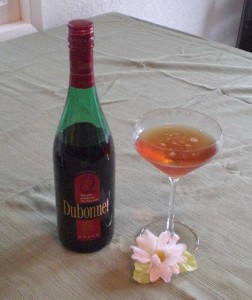 Sure, I’m familiar with Dubonnet. You see it on every bar shelf, without question. It’s almost always full and it’s sitting next to the equally dusty bottle of Punt e Mes and the half-empty bottle of Galliano. Old school, but obviously a requirement for the bar. Anything that’s been around this long deserves a spot on the shelf in honor of its sheer longevity.

When the folks at Dubonnet sent a bottle for me to try, I went on a treasure hunt in my own bar. And there it was: My own long-forgotten bottle of Dubonnet, which had been sitting in my bar, unopened, probably for years. I’m not sure how long, exactly, but the label had changed at least once between then and now.

I cracked open the fresh bottle this weekend and finally tasted Dubonnet as it was intended. More accurately, I was drinking Dubonnet Rouge. Just like Lillet, Dubonnet is a fortified and aromatized wine, and it also comes in a Blanc version (with a green label). But while Lillet Blanc is the more popular version of that spirit, the red red Rouge is the more popular version of Dubonnet.

On its own (and on the rocks), Dubonnet immediately strikes you with the taste of Port wine, a raisiny concoction with a distinctly herbal, bittersweet aftertaste. It’s not at all bad (and easily better than Lillet Rouge on its own), but not something I’d likely drink every day. Dubonnet’s claim to fame is in a cocktail (often called the Dubonnet Cocktail) which is half Dubonnet Rouge, half gin. Sometimes a dash of orange bitters. Dubonnet goes well with gin, but it does get awfully lost amidst the juniper. How much you enjoy this tipple is directly related to how much you like gin. I thought it fine with Tanqueray, though probably better with a more citrus gin.

Out of curiosity, I tried one of Dubonnet’s featured recipes, the Fat Like Buddha Cocktail (see below), from the bar Death & Co. This stout cocktail showed some really interesting flavors (I used a different rum; didn’t have Flor de Cana on hand), and though orange is more the highlight in the glass (don’t skip the flamed orange twist), it does indeed show that Dubonnet has range far beyond ice cubes and gin. Yeah, you could probably do about the same thing with ruby port, but for just 11 bucks it’s something fun to tinker with.

And here’s the cocktail…

Stir and strain into a martini glass. Garnish with a flamed orange twist.