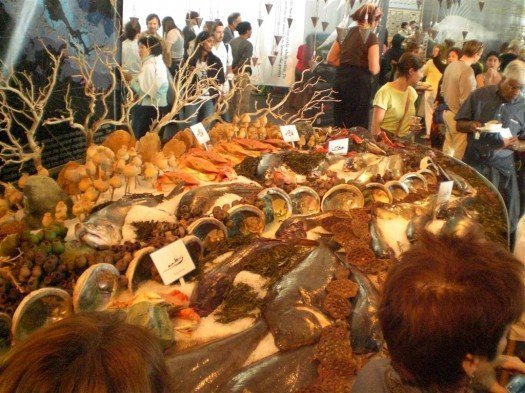 By now the “Slow Food” movement (get it?) should need no introduction. But for the uninitiated, the idea is to eat local, sustainable, organic, and unprocessed food, as much as possible. They’re big on veggies, biodiversity, and all that other good stuff. Hey, I’m all for it. Lord knows I need no more high fructose corn syrup in my diet.

Slow Food Nation was the inaugural event of what is described as “the largest celebration of American food in history.” (And no, they don’t mean hot dogs and burgers.) All weekend it’s been one long party down at Fort Mason, San Francisco, with spillover events at City Hall (and a Gnarls Barkley concert ’round the corner).

Describing all the festivities of Slow Food Nation would take more typing than I have in me this evening, so I’ll limit my comments to the only one I went to, the “Taste Pavilions,” which were spread through the 50,000 square foot Festival Pavilion. Visitors paid $65 to enter and gain $20 in “slow dough” credits to wine and dine their way through some 16 different booths, each with a nibble or tipple available for a slow buck or two.

Of the 16, I managed to hit half the booths in a full two-plus hours at the show, which I’d call a qualified success but which needs some drastic rethinking if they want to do it again next year. More on that in a moment…

Let’s start with the tastes. So many friendly folks offering up their wares, most of which were quite good. Pumpkin chip honey at the honey pavilion? Yes! Prosciutto sliced on the premises at the charcuterie booth? Wonderful (if far too small a piece). Salt chocolate ice cream at the ice cream pavilion? Perhaps my favorite bite of the night. Another surprising hit: A wonderful bison stew (served with a side of hominy) at the sparsely attended “native foods” pavilion. Considering how little actual food there was at the event, it was nice to end the evening with something more substantial then a thimble of honey or a chunk of blazing hot lemon chutney.

Drinking was in full effect at the event (hence my attendance), with three pavilions dedicated to booze: beer, wine, and spirits all represented. Alas, my biggest complaint is reserved for the debacle of a wine pavilion, in which thirsty customers stood in lines 10 to 20 people deep and, when they reached the front of the line, had to spit out a number (of some 350 wines available), which sent the staff scurrying to the back to find the right bottle. Then you immediately get back in line and slowly drink the wine while you wait. We made it through the line twice — my favorite of the four wines arguably being a Tablas Creek Esprit de Beaucastel 2006, though nothing was altogether pleasant in that stuffy, sweaty heat.

Much more pleasant was the less crowded beer pavilion, which was much more pleasant if for no other reason than it was outside. One slow buck got you a big glass of beer — dozens were on tap or in bottles — and I really enjoyed Alaskan’s rich Smoked Porter and an IPA from Drakes.

But perhaps my favorite drinking experience had to be some the libations in the spirits pavilion, a crowded but manageable area full of interesting straight spirits. I’d had many on hand before, but really liked Cap Rock’s vodka and had perhaps the best Pimm’s Cup I’ve ever tried. Square One Vodka was even making something called a Celery Cup (cucumber vodka, Pimm’s, cucumber, cilantro, lemon juice, agave nectar, and celery) which was my favorite cocktail of the night.

Still, getting to taste all this stuff was often very frustrating and invariably meant waiting, sometimes interminably. I sadly had to skip some of the most popular pavilions — cheese, chocolate — for time.

Really: Slow dough? Is this the best way to manage the event? I have to think that much of the time wasted involved people having to hand over their slow dough cards for checking off afterward is the main reason for the lines: Most of the booths otherwise simply handed you a plate, told you what it was, and you were done.

Still, most of the pavilions were manageable, but the wine pavilion was a disaster. I guess this isn’t the kind of place for a wine writer to expect to taste a few dozen wines (most people were paying extra for full glasses of wine once they got to the front of the line), but the whole idea of tasking 10 pourers with pouring hundreds of different wines in such a confined space is simply insane. The whole festival needed twice the space and twice the staff, but the wine area easily needed four times the space and staff.

Did I have fun? Absolutely, and the crowd seemed to take things in stride. Next year, I hope to do it all again… maybe with a little more elbow room and a little more time to chow down.

Now… is it wrong to really want a hamburger?