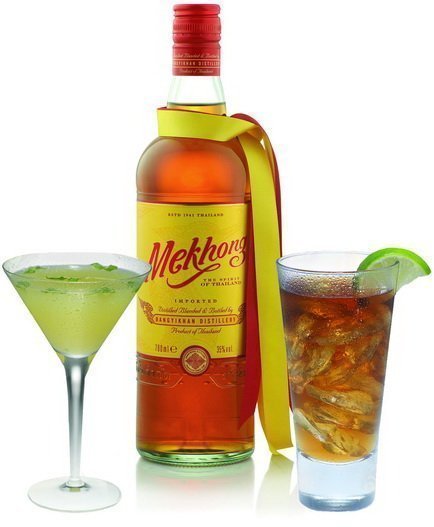 Complicated and heavily spiced liqueurs are always a difficult bag. They tend to blend poorly with other spirits and on their own can be imbalanced. Put it this way: No matter how much you like spiced rum, when’s the last time you had it mixed with anything other than Coke?

Mekhong is an unusual spirit from Thailand (where it has been on sale for over 60 years) that spiced rum fans may find interesting. At 70 proof, it’s a blend of 95 percent cane sugar and 5 percent rice, which is then imbued with Thai herbs and spices to give you, well, something unique.

Bitter and sweet play together in Mekhong, and only somewhat nicely. That strong hit of bitter, dried herbs punches you on first sip (on the rocks is recommended), then it follows up with some much-needed sweetness. It’s not enough, in my mind, though, to make up for an initial blast that reminded me of an amaro (and I like amaro).

Mixing was tricky. I really didn’t care for the way Mekhong blended with cola, which gave off a kind of funky taste. Ginger ale was even worse.

Mekhong, as you’d expect, has all kinds of cocktail suggestions on tap, but sadly I could make none of them: Every one relies on something exotic, from fresh Thai basil to coconut puree to a quarter of a fresh pomegranate. If you’re crawling in the fruits of southeast Asia, put a bottle of Mekhong on your shopping list. Casual drinkers seeking something spicy should stick with Kilo Kai.