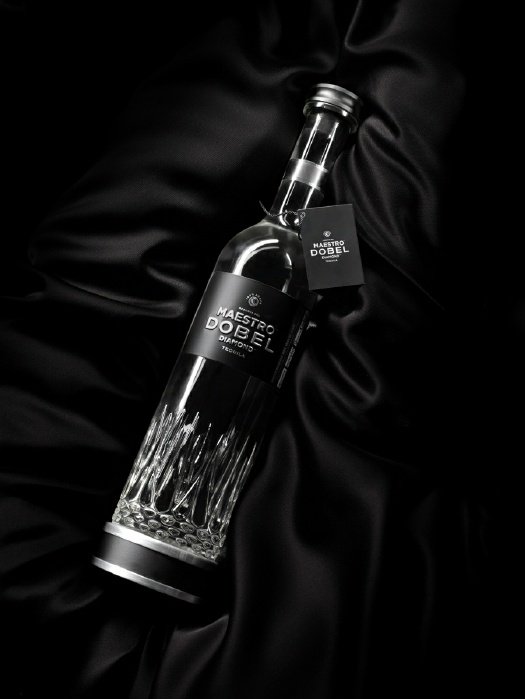 Even Donald Trump could learn something from the braggadocio on display at Maestro Dobel, which claims (among other superlatives), to be “the first-ever diamond tequila” … “unlike any other aged tequila” … the “result of a proprietary blending and filtration technique.” … “the liquid embodiment of my passion for tequila” … the result of “six generations of my family’s dedication to crafting the finest tequilas available” … and “a renaissance — a new way of thinking about and enjoying tequila.” (Update 2020: This style has since become widespread and is known as cristalino.)

That’s a mouthful, and considering the just-released tequila costs $75 a bottle, it better stack up, eh? I put the good Maestro to the test and found it really intriguing and truly unusual in a world where many tequilas, even super-premium ones, can taste a lot alike.

Maestro Dobel is indeed a “new way” of making tequila: For starters, it’s a nearly clear, white spirit, but inside the bottle is aged tequila. At least three different aged tequilas are found in the blend inside the bottle (including reposado, anejo, and extra anejo expressions), but the spirit is then filtered to “gently expel congeners and colors from the tequila.” The how is “proprietary.” It’s kind of like the idea behind Crystal Pepsi: Flavor, yes. Color, no.

The flavor is wholly unexpected, especially if you’re not in on the whole decolorization thing: There’s vanilla, butterscotch, and woody oak where you’d normally get just the heat and vegetal notes of silver tequila. Agave is there, but understated, well mellowed by the aging process. You actually get more agave in the aroma than the taste, especially after the spirit opens up a little in the glass.

But for a blend of such well-aged tequilas, Dobel does clearly lose something along the way during all this filtration, and one can only imagine while sipping this mellow, almost “light” tequila, what the original base spirits must have tasted like. Is the colorless thing a gimmick or a real benefit to the drinker? If I feel like a million bucks tomorrow (those “expelled congeners” are what allegedly give you a hangover), that will be the real test to see whether Dobel is worth its Diamonds.

As a side note, the bottle alone deserves some discussion. It comes in an overly-tall decanter, with agave-like spikes molded into the lower portion of the glass. The base of the bottle is embedded into a built-in, metal coaster, and the label is forged from metal, too. Each bottle is individually numbered (mine is #292), dated, and signed.

Tequila fans: I understand if you can’t afford a full bottle of Maestro Dobel, but whatever you do, you need to track it down at least for a shot. You’ll be talking about it for weeks.