Dos Lunas? That’s two moons for you, gringo. And since we only have one moon here on Earth, one can only presume Dos Lunas is actually from Mars. (OK, the actual story involves an ancient culture that once believed we had two moons here, but I like my story better.)

Dos Lunas Anejo has a good taste of caramel in it, some wood, lots of agave fruit. Interesting coconut notes as you continue to drink it. As anejo tequilas go, Dos Lunas is on the light side. The color and flavor aren’t as deep as most anejos. I suspect it could be easily mistaken as a reposado tequila

But man, the bite on this tequila is a knockout. It’s just 80 proof, but I’d swear I was drinking 151, there’s so much heat in this glass. The powerful alcoholic punch overwhelms the flavor profile, and though that effect fades a bit as the spirit opens up in the glass (and you drink more and more of it), it’s still enough to blunt a lot of the nuance in the spirit, at least at first.

I’m torn on Dos Lunas, because I liked it a lot after I let a glass sit out for an hour and open up, but few drinkers are going to take that kind of time when they reach for a shot of tequila. This will be one to come back to after a few months for some head-to-head with other anejos.

Oh, and the rocket-shaped bottle, well, that’s a post unto itself. 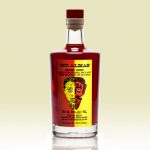