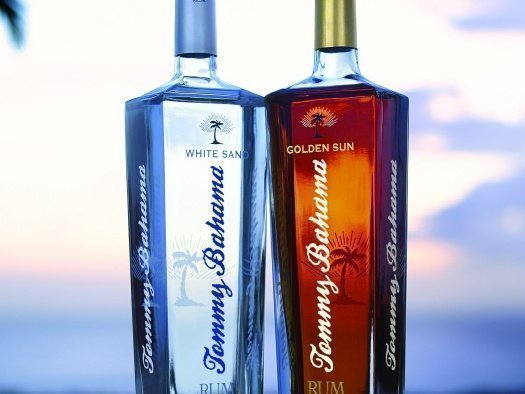 When the Wall Street Journal’s Eric Felten named Tommy Bahama white rum his favorite of some 10 rums in a blind tasting, I figured I had to try it. The company was kind enough to send both of its rums, light and dark, to be put to the test. Both are bottled in Barbados (not, er, The Bahamas) and both are 80 proof. (And these stout bottles… sheesh, you could knock out a mugger with one of these!)

Tommy Bahama White Sand White Rum – This is a pretty standard, though woody, white rum. Not sure what Felten was so enchanted with, but, hey, it’s better than the usual fare. As with a lot of white rum, charcoal is pretty heavy on the palate. It’s a good rum, nothing wrong here at all. Works well in cocktails or with simple mixers, but I’m not over the moon about it. B+ [BUY IT NOW FROM DRIZLY]

Tommy Bahama Golden Sun Dark Rum – This dark rum is aged at least three years in oak, giving it a distinct whiskey character, with a strong, sugary undercoating. I enjoyed this straight, on the rocks, but there’s a hint of charcoal in the aroma that makes everything a little off… just a little. A little bitterness plays out in the taste, rubbing up against the coffee notes the way old, burnt coffee can taste. Weird in a rum, but it’s really just a hint of that, nothing major. Again, Golden Sun works better in cocktails, but rum aficionados may find it interesting to compare against their favorite grog. B+ [BUY IT NOW FROM DRIZLY]