If Bourbon & Branch is SF’s “east side” kingpin, Alembic represents the west side. Nestled in the heart of the Haight-Ashbury, it’s another Mecca for drinking junkies looking for innovative cocktails using unusual, and in some cases, home-made, ingredients.

The Alembic Bar is a dainty small place, mostly just counter service with only a few small tables for those who arrive early. My pal Alexei and I were lucky enough to get one, and we were taken care of by a stellar waitress who was zippy and helpful throughout the night.

The cocktail menu is daunting: Two pages of mixed drinks and scads of straight liquors, wine, and beer. It’s the only bar I’ve been to that has both Sheep Dip and Pig’s Nose on the menu.

Naturally we started with cocktails, which Alembic separates into “the canon” and the “new school.” From the canon came The Vieux Carre: A Manhattan-like libation with rye and Cognac instead of Bourbon, which I found nicely sweet but maybe would have been better as a straight Manhattan. Best part: The home-made brandied cherries as a garnish.

Surprisingly similar was the new school “Vow of Silence,” a more bitter concoction of rye, Benedictine, Creme de Griotte (a cherry liqueur), and bitters. The wide swath of orange peel garnish really made the drink, but by the end I was ready for something far less bitter. My next cocktail was a likely downfall (more on this later): The Macanudo looks good on paper — tequila, apricot eau-de-vie, agave nectar, and black tea liqueur — and the smoky-sweet combo was pretty good, but again I found myself wishing I’d just had a regular shot of tequila instead of such a complicated blend.

We finished up the night with a dessert wine and, at Alexei’s urging, a very sour Belgian beer which we both agreed was not to our taste and left mostly unconsumed.

One big thing in Alembic’s court over B&B is that it serves food: A complete menu, in fact. The bacon cracker jacks (exactly what it sounds like: caramel popcorn, cashews, and bacon) is a must-order, and the shishito peppers were a knockout. I was less thrilled with the Moroccan-spiced lamb sliders, which were totally overpowering for anything other than knocking back with plain beer.

I didn’t feel like I drank very much that night (two cocktails, really), but boy did I pay for it the next day with an awful hangover. I blame that Macanudo, and will never follow up whiskey with tequila again. But even more disconcerting is that the three cocktails (all three served unimpressively in boring, oversized coupe glasses) just weren’t much to write home about. All three were perfectly fine, but nothing better than drinks I’ve come up with on my own and nowhere near the masterful creations on display over at Bourbon & Branch. In this battle of the bars, there’s really no question who’s the champ. 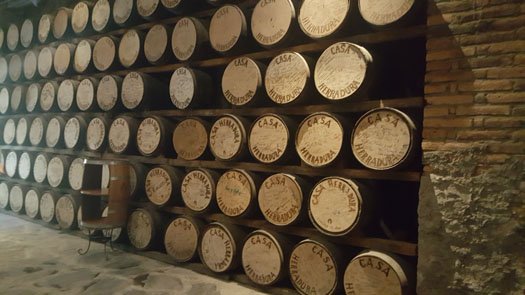