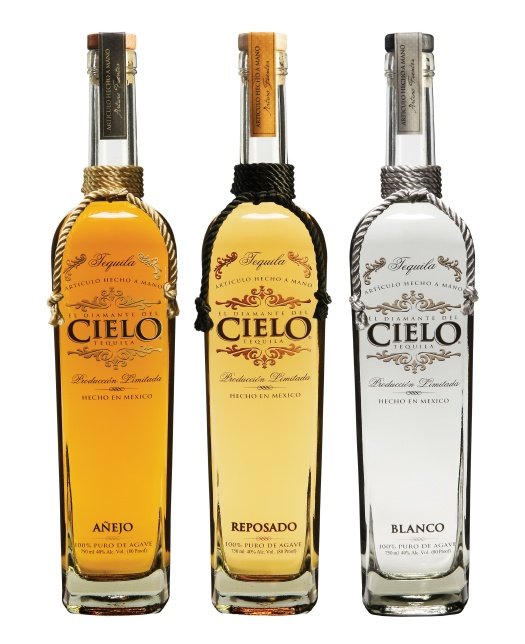 The tassels. All month long they’ve been talking about the tassels, the ones that adorn the three bottles of Cielo tequila that have been anxiously awaiting review on the bar.

But there’s more to Cielo than just a pretty face. This is good tequila across the line. All are 80 proof and, of course, 100 percent agave, comments on each variety follow.

Cielo Tequila Blanco -This blanco is triple distilled and crystal clear. (Cielo says it discards both the head and tail of every batch it makes, leaving only the best for the bottle.) As silver tequilas go, Cielo Blanco is extremely creamy, well-rounded with both traditional (but not overpowering) agave flavor and plenty of pepper and herbal notes. The Blanco works well in a variety of cocktails or for sipping. I’m a big fan. A- / $40

Cielo Tequila Reposado – Cielo’s reposado is considerably darker than most reposados: It’s as dark as most anejos in my stock, actually. (The picture below doesn’t do it justice.) Cielo ages its reposado for the maximum amount of time allowed by Mexican law: 364 days. That extra time in the barrel makes for a much better reposado than most of the pathetically weak, yellow reposados out there, which just come across like Anejo Lite.  Cielo’s version is brilliant: Still bearing nice agave character but tempered with sweetness, spice, and a surprising nuttiness (hazelnut and almond). It’s complex and delicious. A grand sipper. A / $50

Cielo Tequila Anejo – With up to four years in the barrel, Cielo’s Anejo technically qualifies as an “Extra Anejo,” the new category legally created for tequila in 2006. (Regular anejo must, by law, be aged from one to three years in oak.) Cielo’s anejo is complex like bourbon, heavily vanilla scented and lightly smoky. Fans of Scotch and better domestic whiskies will find this an intriguing counterpoint to grain-based spirits. And yet something about the reposado keeps drawing me back… it does wonders while still keeping its roots in agave, while the anejo really only hints at tequila. Hey, it’s complicated. A / $65