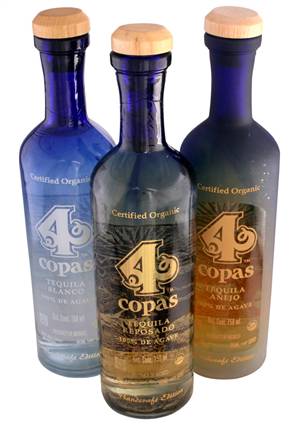 Organic tequila? Why not? Tequila (real, good tequila, anyway) is made entirely out of one plant, the agave, so if you can raise it organically, you’re pretty much making organic tequila. (Making an organic gin, say, with its myriad botanical ingredients, would be considerably more difficult.)

4 Copas (translation: “4 cups,” from a saying that holds if one shares four cups with friends, they will be friends for life) sent its three primary bottlings for our consideration. All are 100% agave, 80 proof, and certified organic. (Certified by whom, I’m not entirely sure.)

As always, we start with the lightest, 4 Copas Blanco Tequila, which is an excellent tequila all around. The taste of agave is present, but doesn’t overpower, rounding out with nice lemony sweetness that will be quite welcome by anyone who likes to suck on a lemon or lime after doing rotgut shots. Here you get citrus complexity without the training wheels, showing exactly how impressive a blanco can get. The finish is black pepper, but only a touch of alcoholic heat. I’m hard-pressed to name a better blanco on the market, but at these prices it better be good. Clearly some side-by-side tasting is required on my part in the near future. A / $57 [BUY IT NOW FROM DRIZLY]

4 Copas Reposado Tequila spends nine months in charred white oak, which mellows a tequila which really needs no mellowing. The reposado has a lot of the spirit of the blanco, but adding a touch of woodiness and a hint of honey and vanilla to it. It’s probably a question of taste, but I actually preferred the blanco by a slight margin, as the reposado’s wood covered up some of the characteristics I enjoyed in the silver. A- / $66 [BUY IT NOW FROM DRIZLY]

At $94 a bottle, 4 Copas Anejo Tequila is, to the best of my recollection, the most expensive tequila I’ve ever tasted. (Though 4 Copas also makes a Limited Edition Extra Anejo bottle that it sometimes sells for a whopping $1,000. Whoa.) Them’s some high expectations. Verdict: Again, very good stuff. A strong cognac character and heavy vanilla. Not sure how long this has been in barrels; I’m checking the the Copas folks. As good as the blanco, but not necessarily better. This is really what sipping tequila is all about. A / $94 [BUY IT NOW FROM DRIZLY]

If I have one complaint about 4 Copas it’s that the corks used to seal the bottles are really lousy. All three of them were cracked and tend to warp badly when I push them into the necks; each also left a serious amount of residue on the wide platform that serves as the opening for the bottle, some of which I’m sure made it into my glass or back into the bottle while I attempted to clean it off. I know shifting to something other than cork will never happen (all top tequilas use cork), but a redesign is clearly in order.

That said, I forgive all of this because the back side of each bottle has a hallucination-inducing engraving of a horse being ridden by a guy with an agave plant for a head. Oh, and the tequila tastes awesome.