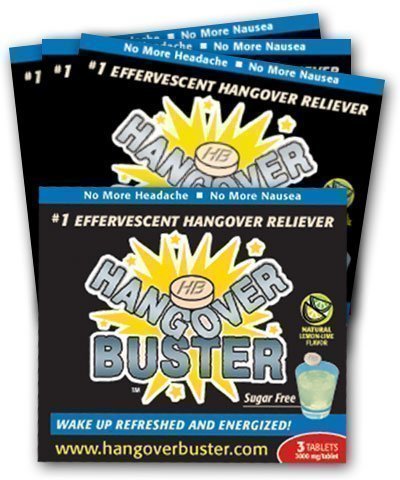 Hangover remedies are legion (and of questionable utility), but the prepackaged variety has become considerably more popular in recent years. My own pre-sleep regimen of two Tylenol and a big glass of water seems to work pretty well, but is there a more “natural” way to do the job?

Hangover Buster is an Alka-Seltzer like tablet that you dissolve in water and drink after (or while) tying one on but before you call it a night. Drink it before bedtime and you’ll have no headache and no nausea come morning. What’s in the tablet? Lots of vitamins, bicarbonate, and a collection of miscellaneous additions including ginseng, caffeine, and white willow bark extract.

The flavor is lemon-lime but it’s really quite bittersweet. Combined with the effervescence I had trouble choking down a whole glass of this before bedtime. The caffeine also gave me pause. I don’t even drink bourbon and Coke after nine any more for fear it’ll keep me up. Having a shot right before bedtime didn’t seem too wise.

Fortunately, Hangover Buster didn’t keep me up any longer than normal, but it did seem to help in the morning after a longish night working the bottles. I find the taste too harsh, though, and I haven’t returned to the stuff, but perhaps that’s subjective. Would a vitamin pill, a Tums, and a ginger ale work just as well? (And cost less than $2 a dose?) Well, that’s an experiment for another day.

B / $6 for a box of three tablets / hangoverbuster.com