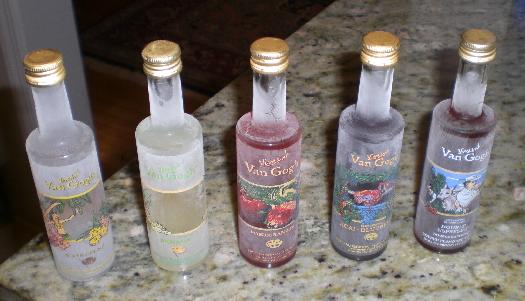 Maybe if Vincent Van Gogh had had vodka like this he wouldn’t have had to cut off his ear.

Van Gogh makes a standard vodka, but it’s best known for its flavored offerings (it currently has 17 of them, plus a gin). The company recently sent a pack of five sample-size bottles for me to try. It’s unclear how much natural fruit is used in concocting these flavors vs. artificial additives, but I don’t know how much it matters in the end. As flavored vodkas, these Holland-born, 70-proof are all worth a try. Some are even exceptional. Here’s a little about each one.

Van Gogh Pineapple Vodka is instantly bursting with the aroma of fresh pineapple, and the taste is there too. The sweetness of pineapple cuts through the bite of the vodka pretty well, giving this a decent smoothness, hard to find in most flavored vodkas. Conceivably drinkable straight, this one excels in cocktails. A [BUY IT NOW FROM DRIZLY]

Van Gogh Banana Vodka I was prepared to hate — banana-flavored drinks are rarely worth drinking — but this one surprised me. The taste of ripe banana is strong, but not overly sweet, a typical problem with banana booze. Not as good and as characteristic as the Pineapple, but still a solid spirit and well crafted for dessert drinks. B+

Van Gogh Pomegranate Vodka builds on the popularity of the antioxidant-filled fruit and bottles it up here. The aroma is nice, but the drink itself is a tad bitter, awfully cough-syrup like, a flavor which tends to go hand in hand with pomegranate (and why it always tastes better blended with, say, raspberry or mango. B [BUY IT NOW FROM CASKERS]

Van Gogh Acai-Blueberry Vodka learns from Pomegranate’s mistakes: Acai on its own is way too rough to drink straight (just ask the folks at VeeV, who added prickly pear and cherry to their spirit), and this blend with blueberry is pretty good. Blueberry is the stronger component here, which is probably for the best. B+ [BUY IT NOW FROM CASKERS]

Van Gogh Double Espresso Vodka (subtitled “Double Caffeine”) is the only brown vodka I’ve consumed. Van Gogh claims it’s the “only FDA-approved vodka on the market today with the bold touch of double caffeine.” I have no idea whatsoever what that means, but it has a very strong coffee kick to it. Not like Kahlua or Starbucks liqueur, which are richer in coffee flavor but considerably less alcoholic, here you get the best of both worlds: A Black Russian, pre-bottled. If you’re looking for an easy shortcut for high-test coffee dessert drinks or drink White/Black Russians by the gallon, this is the spirit for you. A- [BUY IT NOW FROM CASKERS]